The pandemic in the west is generally accepted to have started on 11 March 2020 – it’s when the USA lowered the boom on international visitors and a few days before I had to scurry home from Socotra in Yemen. So today we’re well over a year into this damned thing and it’s certainly been a learning experience.

I look back over my Coronavirus Notes blogs which I put up from time to time and if there’s one consistent theme it’s that line from baseball player and sage Yogi Berra that ‘It’s tough to make predictions, especially about the future.’

• 19 July 2020 – I mused on how the Buddhist nations of South-East Asia: Myanmar, Thailand, Laos, Cambodia, Vietnam – had dodged the bullet on coronavirus. Well that still pretty much holds true. It’s hard to tell how Myanmar is doing – at other things apart from the pandemic of course – but the figures for the other four nations are still extraordinary. Thailand in particular, 69 million people and even though cases are clearly spiking up at the moment they have yet to reach their 150th coronavirus death. If they had USA-like figures it would be well over 100,000 deaths adjusted for their population. Cambodia and Laos are also showing worrying increases in cases although not compared to much of the rest of the world and Laos only in the last few days. Laos is also yet to record its first Covid19 death. 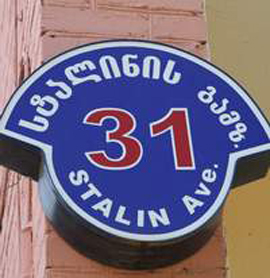 • 20 July 2020 – I looked at the three ex-Soviet Caucasian republics and pondered why Georgia was doing so well and neighbouring Armenia so badly. Azerbaijan fell between the two. Friends in Armenia put it down to the rule-following behaviour of their Georgian neighbours, Joe Stalin was a Georgian boy of course and he certainly expected his rules to be followed. Then in early October cases suddenly took off in Georgia and for two months surged steadily upwards and passed Armenia. As of today neither is doing terribly well and Georgia still worse than Armenia in terms of new cases per million. What went wrong? 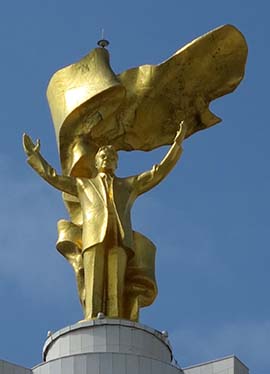 • 21 July 2020 – The 12 countries where there had been absolutely no cases of Conavirus. Of course we all believe that North Korea and Turkmenistan have managed to keep the virus totally at bay don’t we? After a few early cases Tanzania in East Africa also managed to wipe out the virus, not from a pre-release vaccination programme, but by the power of prayer. Unfortunately for prayer it’s highly likely the country’s prayerful president John Magufuli died of Covid19 on 17 March 2021.

The Turkmenbashi keeping Covid19 away from Turkmenistan. ►

Most of the virus-free countries are in the South Pacific and a year later it still seems that assorted Pacific nations have kept the pandemic completely or almost completely away. Except for French Polynesia which for a spell peaking in early November 2020 was one of the worst places in the world. The population of the scattered islands, Tahiti the most heavily populated, is only a quarter of a million and today the daily case rate is back down to around 5. What went wrong and then what did they do right?

• 22 July 2020 – Next I looked at Africa, East Africa in particular. By then Tanzania was already claiming prayer had done the job, but neighbouring Rwanda was fighting the virus with some very innovative mass testing techniques. Other (more advanced) countries have subsequently followed Rwanda’s lead. South Africa was – and is – the virus centre of Africa with over a third of the cases for the whole continent, but they still seem to have got a grip on the pandemic. After two big spikes peaking in mid-July and early-January the rate of new cases in South Africa is down between the star vaccinators Israel and the UK. Whatever the story in individual countries overall Africa has certainly not had case rates like Europe or South America and nor has the death rate been so terrifying. Which is not to say 50,000+ deaths in South Africa is not a scary number.

• 23 July 2020 – Time for the Gulf States and Singapore, both of which had very high case rates. Recently the UAE and Bahrain have been vaccination stars, but all the vaccinating has not brought the case rate down like it has in Israel and the UK, the real vaccination stars. Singapore has, however, brought the case rate right down, not to zero, there are still a lot more daily cases per capita than, say, Australia or New Zealand, but still to figures which any European country would die for. And from Day 1 deaths are exactly what has not happened in Singapore, hardly anyone has died. For that matter very few native Singaporeans or first-world expats have caught the virus in Singapore, it’s almost all been amongst the developing world guest workers who are often living in crowded dormitories or (as in Australia and New Zealand) from overseas arrivals who have brought the virus with them.

• 26 July 2020 – Time to look at how fast the virus was galloping along in assorted countries and almost nine months later it’s not a happy story. Vaccinations may have brought the US case rate tumbling down, but it’s still not much better than it was in late July 2020. For all their vaccinating (it’s the vaccination star for South America) Chile is still much worse than it was back then.

I’ve posted on a few other Coronavirus thoughts. ‘How bad is bad’ for example. In some countries (Australia in particular) the policy is to shut everything down when a single case pops up. In other countries (the USA?) it’s life as normal no matter how many cases and deaths are happening. And with Yogi Berra’s ‘tough to make predictions’ message firmly in mind I remain completely puzzled why the story should be so different in one county from another. Why is the story today so bad in France, worse than most other European countries, particularly the other larger ones. Right now the daily case rate in France is twice as bad as Italy or Germany, three times as bad as Spain and more than 10 times as bad as the UK. Why should tiny Andorra, wedged between France and Spain, be so bad, almost from Day 1? With less than 100,000 people surely they could just vaccinate everybody in the country? Although as of today France, Andorra and, for that matter, Netherlands have pretty much identical daily case rates per million.

Then there are countries with lots of cases, but comparatively few deaths. Like Singapore, noted above. If people died from Covid19 in India like they do in the UK they would have had a million dead, instead of 165,000, The Economist mused back on 13 March 2021, before the current explosion in cases. And what’s up with vaccinations? If you vaccinate everybody in the country new cases should simply stop, apart from people arriving from overseas, right? That certainly seems to be happening in Israel where the daily case rate is only 2% of what it was three months ago. There’s also been a dramatic drop in the UK, but other big vaccinators aren’t seeing the same return for their efforts?

Well I’ve had my first vaccination, despite the fact that Australia is proving curiously inept at getting needles into arms. Next virus post I’ll look at the often silly story in Australia. Starting with the fact that in the last 12 months Australia – as a country – has ceased to exist. It’s broken down into a collection of separate states which generally don’t cooperate with each other.