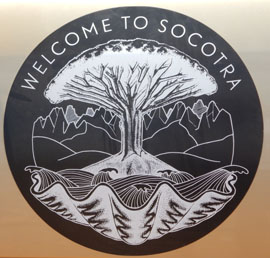 ‘Want to go to Socotra?’ my friend Simon Calder, eccentric travel editor for the London Independent, asked me in May last year.

‘Absolutely,’ I replied. I mean, what self-respecting traveller wouldn’t want to go to Socotra?

‘Right,’ said Simon. ‘Just send £800 as a deposit to Lupine Travel in Wigan.’ Lupine had been making a name for themselves with weird and wonderful trips, in particular the Wigan to Pyongyang rail journey.

That runs from one centre of Communism – after all George Orwell’s Road to Wigan Pier is set there – to another. Pyongyang is the capital of North Korea and hometown to the three mad North Korean Kims: Kim Il-Sung, Kim Jong-il and now Kim Jong-un, or Fatty I, Fatty II and Fatty III as the Chinese like to describe them.

Then there was Simon’s real winning point, ‘then you have to be at Cairo airport on the morning of Wednesday 11 March for the flight at 2 am. With US$1,000 in cash to pay for it.’ Flights to interesting places often seem to depart in the early hours of the morning and one where you have to pay for it crisp greenbacks? Well that has to be a winner.

I didn’t know that coronavirus, Covid-19, was going to rudely intrude, but at 0200 on Wednesday 11 March off we went on Yemenia flight IY607. Yes Socotra is part of Yemen, it’s a remote island off to the south of the Arabian Peninsula and, if you want something else to worry about, it’s not far to the east of Somalia. Relax, the war in the Yemen doesn’t intrude, although for a number of years the trickle of visits by Socotra-enthusiasts had totally dried up. Now the tap has been slightly opened and you can fly there on the once-weekly flight from Cairo, stopping at dawn at Sayun about half way across the country from Sana’a. Sana’a is the exotic capital of Yemen, the place we all want to go to and the place where Saudi Arabia, aided by all those US armaments Donald Trump has sold the idiots, is busy causing mayhem. 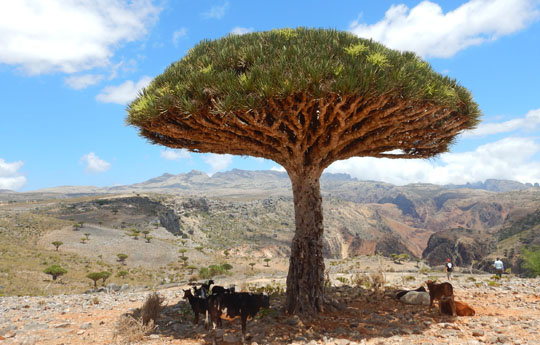 ▲ Dragon’s Blood tree sheltering goats on the Diksam Plateau. The island’s iconic tree – it bleeds dragon’s blood when you cut it – looks mushroom-like when it reaches maturity. It only grows above 300 metres altitude. Socotra has been described as the ‘Galapagos of the Indian Ocean,’ but it’s vegetation rather than animal life which makes the island so unique. Socotra is home to over 300 endemic species.

Our group of nine – it should have been 14, but four got cold feet before the departure day and one failed to turn up at the airport – although he was in Cairo – because he’d got the day wrong. Flights just after midnight can cause that problem. We were eight boys – and I underline boys – these were travel geeks-nerds-enthusiasts down to their last weird visa stamp – plus one remarkably sane Canadian woman, ‘hello Wendy,’ and our equally sane English guide Sascha.

▲ The Socotra Hotel in Hadibou

So we flew in to the airport near Hadibou, the Socotra capital, checked into the Socotra Hotel and embarked on what should have been a seven day exploration of the island. Until coronavirus intruded on Day 5. 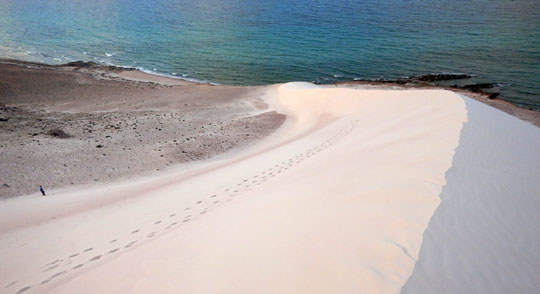 ▲ Our first excursion out of Hadibou was to Deleisha Beach, not far east of the capital and site for one of the towering sand dunes the fitter amongst us would attempt to climb during the week. 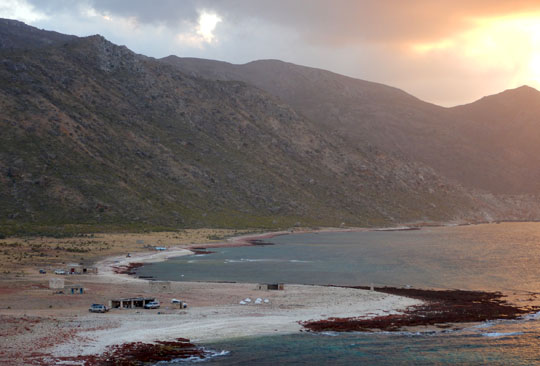 ▲ We kept our rooms at the Socotra Hotel (see my next blog on Hadibou for the mosque-view from my window) all week but the next night we camped at Dihamri and swam over the coral reef right offshore. This is the sunset view from the outcrops at Dihamri Point, looking back over the campsite towards the Deleisha Dunes I’d climbed the previous day. Earlier in the day we’d driven and then walked up the Ayhaft Canyon south of the airport and walked up to a swimming hole. 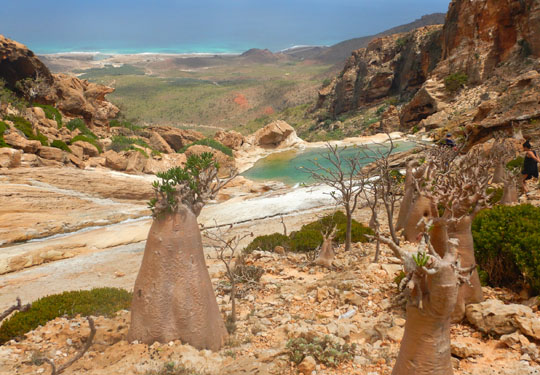 ▲ A steep and rocky road took us up to Homhil from where we walked along a valley dotted with interesting trees – bottle trees and Dragon’s Blood trees. I’ll put up another blog on the island vegetation and the goats and vultures we regularly encountered. The walk led us to another wonderful swimming hole, ‘the best rockpool in the Middle East,’ we were told. And who were we to argue? It even featured an infinity edge, gushing over to make its way down to villages on the south coast of the island. 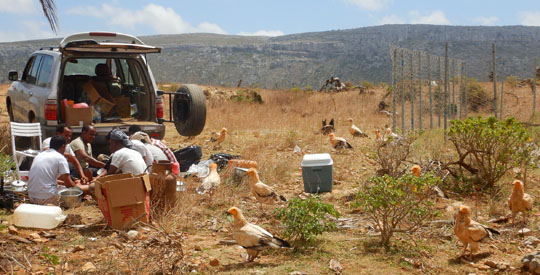 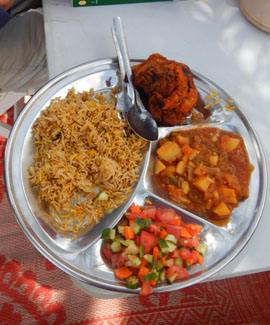 ▲ At Homhil our drivers and kitchen crew fixed lunch surrounded by scrounging Egyptian Vultures (also known as Socotran Buzzards). These surprisingly handsome yellow-feathered birds are a familiar part of the Socotran scene from the centre of Hadibou, to the beaches where we camped and up into the hills. 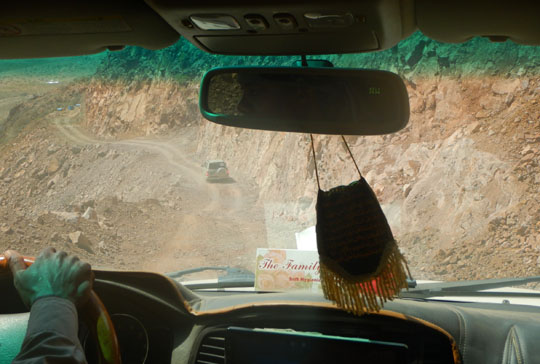 ▲ Driving down that rocky Homhil road back to the coast. In fact most of the road along the coast was in surprisingly good shape, clearly because it’s all of relatively recent construction. On the way back to Hadibou we stop at the Qaria Lagoon (flamingoes are sometimes seen here), then at Adebe Abdullah’s Dragon’s Blood tree nursery and the sparse remains of the ancient capital of Soq, just east of Hadibou. 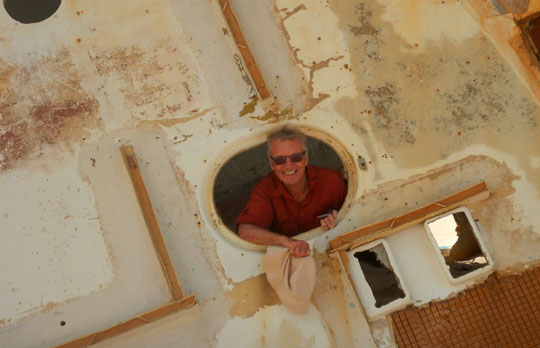 ▲ We also stopped to inspect the remains of a couple of shipwrecks on the beach. Further east, near Deleisha beach, the Tanzanian-registered Gulf Dove oil/chemical vessel was washed up on the shoreline. 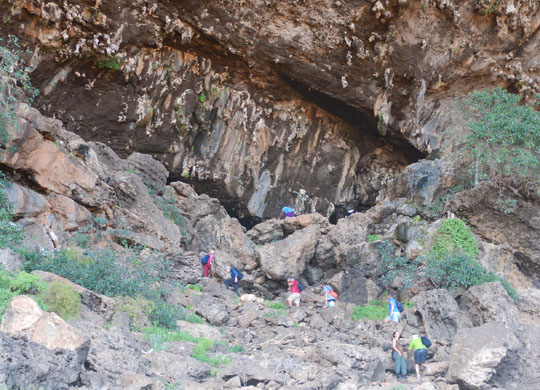 ▲ The next day we set out east again and made the long climb up to Hoq Cave, this is the towering entrance into the cave. Inside we walked for about a km underground and the cave clearly continued much further. It’s probably a very impressive cave, but when you’re using the same torch to illuminate where your feet are going and to see the stalagmites and stalactites, it’s hard to really appreciate the formations. There’s a lot to be said for the more developed ‘tourist caves’ where pathways and those evocative shapes are all brightly lit. 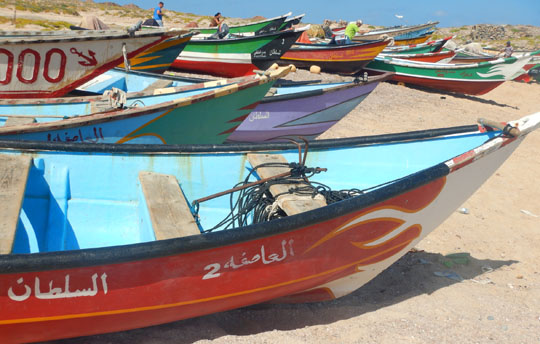 ▲ A fishing settlement near Ras Erisel, on the south – Indian Ocean – side of the point.

From the caves we continued to Ras Erisel, the eastern tip of Socotra. Here you can stand at the end of the island where the Arabian Sea to the north meets the Indian Ocean to the south. The end of the island is marked by a couple of towering whalebones and a carpet of tiny porcupine fish washed up on the beach. Just offshore a pod of dolphins cavorted energetically.

▲ Returning to Hadibou we stopped at ‘Crab City’ where crabs had constructed this urban landscape of conical towers. The crabs were regularly coming and going from the sea, but always retreated away as you approached them. A little further west there was another dune-climbing opportunity on the Arher Dunes which stretch for km along the coast between the Hoq Cave and the Ras Erisel point.

On Day 5, which turned out to be our last day, we drove west and up on to the Diksam Plateau where there were indeed a lot of Dragon’s Blood trees in the Firhimin Forest and on the sides of the Wadhi Dairhu, much more an impressive canyon than simply a mere wadhi. Back near the coast we climbed down into the Ghoba Pool which we were told was a meteorite crater, although in fact it looked much more like some sort of sinkhole. 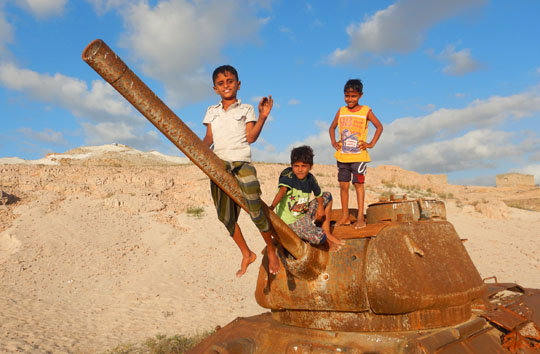 ▲ Finally we ended up at Qalansiya the second largest settlement on the island, towards the extreme western end of Socotra. Rusting Russian tanks submerging into the sand were a reminder that the long disputes in Yemen, often used as proxy wars between the USSR and the West, always threatened to move offshore and engulf the island. The next day we should have been making a boat trip to Shuaab Beach and the following day exploring the south coast and another cave.

Unfortunately at this point the worldwide coronavirus crisis kicked in and upended our plans. Just before midnight we were roused from our tents, packed up camp in the dark and headed back to Hadibou. The weekly flight was going to leave in the morning, 48 hours early, before flights to and from Yemen closed down. Our return to Cairo involved a nine hour stopover in Aden, an airport I never need to see again, and then I had to make a quick exit from Cairo before Egypt flights shut down as well. Back in Australia I’m now locked down in 14 days of self-isolation. I can’t even go home because if I did Maureen would also have to self-isolate. So I can add two weeks of Airbnb to the cost of my Socotra trip.

Now those Russian tanks at Qalansiya and our stop at Aden were a reminder that mainland Yemen, but not Socotra, is an ongoing mess. It’s slightly absurd that in Latin and Ancient Greek the Yemen region was described as Arabia Felix – fertile, fortunate, happy or blessed Arabia. It’s hard to apply those terms to Yemen’s tumultuous history. After struggles between the Ottoman Turks, the Saud family and the British – who had grabbed Aden as a useful refueling (well re-coaling) port for British ships heading to India – Yemen settled into years of north-south and east-west disputes. The British were gone by 1967, but in recent years Yemen has become a centre for the Islamic world’s great Shia-Sunni struggles and a proxy war between Saudi Arabia and Iran. As usual it’s the general population which suffers the famines and cholera as Mohammed bin Salman, that well known journalist decapitator, rains his American-supplied smart weapons down on schools and weddings as well as the occasional terrorist.

Blogs on Hadibou and Socotra’s plant and animal life will follow in the next few days.