Fairly early on in the pandemic it became clear that something weird was going on in the Arab Gulf State. And in Singapore.

▲ Singapore old and new, the Merlion and Marina Bay Sands with its ‘swimming pool across three towers.’

These countries have large ‘guestworker’ populations who live lives quite separately from the local population. They’re not moving in and becoming part of the country – like the Turkish population of Germany, the French-Arabic population of France or the sub-continent immigrants of the UK. They’re effectively there temporarily, generally male only (they don’t bring their families with them) although there are large female guest worker populations as well, usually working as domestic servants, but also not bringing partners or families with them. In a number of countries they constitute a very large proportion of the population, the local population, citizens of the nation in question, may actually be a minority in their own country.

These ‘temporary’ workers often live in crowded dormitory accommodation and may have all sorts of restrictions on their lives. The huge number of construction workers in Qatar, building the stadium facilities for the 2022 Football World Cup, have been a particularly bad example. Google ‘Qatar World Cup deaths’ for the story. The UAE – United Arab Emirates which means Dubai, Abu Dhabi and so on – also has large migrant worker populations and so do Bahrain, Kuwait, Saudi Arabia and even Oman.

All of these countries have had very severe Covid-19 case rates, often predominantly within the migrant worker dormitories and accommodation, but increasingly spreading out to the general population. Squeaky clean Singapore is also heavily dependent on migrant workers and, possibly because media and reporting is comparatively more open in Singapore, the story has been more widely reported.

At first Singapore seemed to be a model for how to handle the pandemic, but then ran off the rails. A story in The Conversation on 30 April 2020 detailed how it all went wrong. Singaporeans returning to the city state at the time were amazed at how they were ‘confined’ in five star hotels. Meanwhile workers from India and Bangladesh were packed into overcrowded rooms so it was no surprise when on 28 April Singapore had 528 new cases, 511 from migrant dormitories and another seven migrant workers even if they weren’t in dormitories. Singapore has brought the new cases figure down, but not far enough, and it continues to be a problem to be swept under the carpet. Or at least kept in the migrant worker dormitories.

On 20 July 2020 there were 310 new cases in Singapore, 6 imported, 7 in the community and the other 297 all in dormitories, 98% of those linked to known clusters. Give Singapore its due, the number of deaths has been remarkably low. With only 5 deaths per million population it’s right down there with Australia and New Zealand. Even orderly Germany has 110 deaths per million population, the UK has 670.

▲ The glittering skyline of Doha, the capital city of Qatar.

The story has been similar in UAE and Qatar, two other countries with big populations of badly treated migrant workers. From day 1 in the pandemic Qatar has been absolutely the worst place in the world in terms of cases per million population. Even Bahrain isn’t a challenger. Qatar’s new case rate has been declining steadily for nearly two months and is down to 22% of its peak, but its peak was so high that the new case rate is still a big big number. Not as big a number as the USA. Amazingly, despite all those Covid-19 cases, Qatar continues to be busiest airline between Europe and Asia or Australia!

Here’s today’s story for the six Gulf Arab states plus Singapore with the USA for comparison. Despite their big cases per million numbers none of the Gulf States are terrible (comparatively speaking) for deaths. The ultimate Covid-19 question after all. 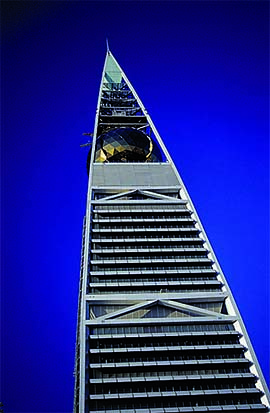 Elsewhere in the Gulf the Saudi Arabia and UAE numbers are declining slowly, the latter somewhat erratically, but at its peak the UAE was never as high as the worst of the Gulf states. As of today Bahrain and Kuwait are going nowhere. Oman is still climbing and in new cases per million it’s currently number 1 in the world, followed by Bahrain. Two months ago I wrote an article for the Omani magazine Black & White in which I touched on the idea of travel bubbles. We were talking about an Australia-New Zealand bubble at the time and a Baltic States (Estonia, Latvia, Lithuania) bubble was about to launch. Oman wouldn’t be keen on a Gulf States bubble I wrote, given their figures were better than the other Gulf states. Well that prediction soon turned out to be totally wrong as the virus raced through Oman.