Like many people these days I spend far too much time analyzing the Covid-19 figures and reading articles on the pandemic. Despite all the learned analysis I keep thinking ‘why haven’t I read anything about this’ so for a week I’m going to note my thoughts about some of the figures. Yesterday I looked at the Buddhist nations of South-East Asia and why they have done so well. In the next few days I’ll muse on:

• The dozen or so countries which have had absolutely no Covid-19 cases or deaths – really?
• The Arab Gulf states – and Singapore – what went wrong?
• The East African nations – doing really well or hiding things away?
• The places – and I’m in one of them, the city of Melbourne – where it all went right and then suddenly went wrong

The three ex-Soviet Caucasian nations – Georgia, Armenia and Azerbaijan – are squeezed between the Black Sea and the Caspian Sea, just north of Turkey and Iran. One of them – Georgia – has handled the pandemic very well. In one of them – Armenia – the figures are terrible. Why has Armenia has gone so wrong? 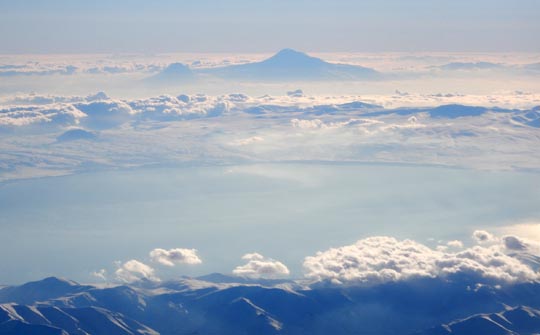 ▲ I visited Armenia in September 2019, so less than a year ago, and I really enjoyed it. A few months prior to that visit I’d flown slightly north of Armenia on a flight from London to Singapore and had this wonderful view of Lake Sevan in the north of the country, backed by Mt Ararat in Turkey, where Noah popped the Ark down as the world dried out after the great deluge. We’d crossed the eastern edge of the Black Sea and were flying over Georgia and then Azerbaijan as I looked south across the lake. I’ve seen Mt Ararat a couple of times before from the road between the Iran border and Doğubayazit in Turkey, eastbound following the hippie trail in 1972 and westbound following the Silk road in 2017. During my Armenia visit last year I drove right around Lake Sevan, the hotel where I stayed on the north shore of the lake really liked that picture.

I’ve visited all three Caucasian states, Azerbaijan also quite recently and I would have categorised them as rather similar countries. So why is Armenia being hit so terribly by the pandemic? Its infection figures are up there with the Gulf States and Singapore as amongst the worst infection rates in Asia and Armenia has absolutely the worst death rate in Asia per million.

That still doesn’t rank against the worst death rates worldwide. In fact if you pulled out two mini-states (Andorra and San Marino) and said that Belgium had been too honest with their death figures, then the UK would have the worst death figures in the world. Followed by Spain, Italy, Sweden, France, Chile and the USA.

Of course Covid-19 deaths are the most important figure, but I also study the figure for new cases per million population, usually as a 7-Day-Moving Average (7DMA). On that Armenia – 138 as of today – is clearly much worse than Azerbaijan at 50 or Georgia with its amazingly low figure of 1.5. For comparison the USA 7DMA figure per million is currently running at 207. All the European countries have brought their figures down significantly, amongst the larger European countries Italy (having started out so badly) is currently performing even better than Germany with a figure of 3.3 and even the UK has seen a fairly dramatic improvement and brought their number down to 9.1. 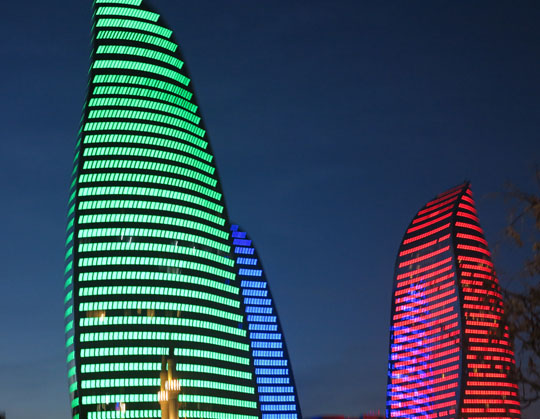 ▲  The Flame Towers in Baku, the capital of Azerbaijan

Armenia is totally cut off from Azerbaijan – they’re still arguing about the Armenian enclave of Nagorno-Karabakh, totally surrounded by Azerbaijan, so nothing moves across that border. Armenia is open to Iran, so Covid-19 could come in from there, but it was also very open (pre-virus) to Georgia. You can drive the 276km from Yerevan, the capital of Armenia, to Tbilisi, the capital of Georgia, in just over five hours, there were regular bus connections. So why is the story in Georgia so good and in Armenia so bad?

I contacted my number one Armenian friend Marina Djabbarzade and her contacts to see if they had an opinion. One response was ‘who says that if countries are next to each other they should have a similar pattern? Greece and Italy? Spain and Portugal? They had absolutely diverging trajectories with COVID.’ Well I can see that right where I am today – Melbourne in the state of Victoria in Australia. We’re suffering a frightening second wave of infections while the bordering state of South Australia (capital city Adelaide) has not had a single case for weeks. The border between the states is closed, but it’s not like they’re an isolated island.

Another expert suggested it was because:

Some of this she put down to Soviet training and expertise! Well Joseph Stalin was a Georgian boy.