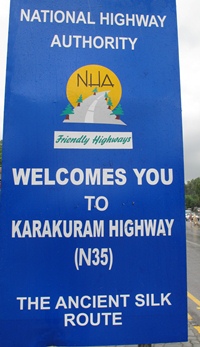 Islamabad to Gilgit
Way back in 1992 I made up a 15 line ‘must do’ list, I don’t think the word ‘bucket list’ had been invented yet. I visited Angkor Wat in Cambodia later that year and put the first tick beside the list. In 1992 Cambodia was still not a totally safe place to visit, two groups of backpackers were killed by remnants of the Khmer Rouge in the next couple of years.

Over the years I’ve added more and more ticks to that list – and drawn up a new, rather longer one – but the last mission completed was Number 13, walking the Annapurna Circuit in Nepal back in 2001.

It was not the ideal time to be travelling through Pakistan, a one-off crazy had upset the (easily upset) Muslim world and soon after I arrived the Pakistani government decided to roll out a public holiday so people could show their ‘love of Prophet Mohammed.’ So much love – much of it in the form of bullets – flew around that 23 people died. In fact Maureen and I faced very few problems and everybody was very nice to us. We saw more unsmiling, unfriendly and unhelpful faces in our first hours in China than we did all the way up the Pakistani side of the KKH. 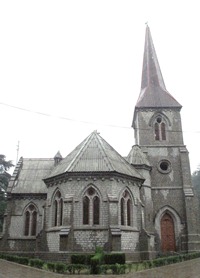 Starting from Islamabad we stopped for lunch in Abbottabad, perhaps Osama bin Laden, during his long stay there, sent out for takeaways from the restaurant we ate at. It’s been regularly commented that it was curious he should take up residence in this genteel (by Pakistani standards) ex-British hill station with its Pakistan Army training college. I like that he also had a sample of Christian churches he could have visited, if he began to lose faith in Islam. This one is St Luke’s.  ► 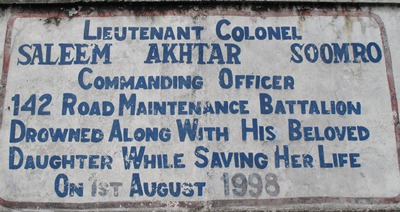 ▲ North of Abbottabad the valley steepened, the river ran faster and memorials like this one reminded that for every 1.5km of the road 1 roadbuilder, Pakistani or Chinese, would die. The road was built between 1966 and 1982, but it continues to need difficult and dangerous maintenance. 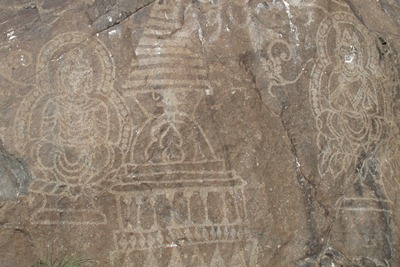 ▲ These Buddhist petroglyphs were just beyond Chilas, a reminder that Buddhism spread its influence through this region long before Islam appeared. North of Chilas we turned off the KKH to follow the even more steep-sided Skardu Valley up to Shigar and Skardu.  We’d only got 40km off the KKH when a landslide blocked our route and we had to make a U-turn and retreat to Gilgit for the night. It was a reminder how prone the road is to landslide blockages.

‘So what’s the longest you’ve been held up by a landslide?’ I asked Najam, our reassuringly calm and expert driver.

‘Often for 2 or 3 days,’ he replied, ‘but a flood washed out a bridge once and when I tried to retreat the next bridge was gone as well. I was stuck for 21 days.’

‘Well that would blow our plans of getting to Kashgar in 2 weeks,’ I thought.

Next report, the Skardu Valley and Shigar, more signs of Buddhism, another delay and then the Chinese screw things up as well.