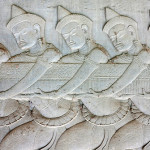 ▲ It’s been 25 years since my first visit to Angkor Wat and things have certainly changed. For one thing you didn’t pay US$62 for a three day pass to visit the Angkor ruins back in 1992. ◄ On that occasion there were probably more straggling Pathet Lao troublemaker...

Travelling the Trans-Mongolian train from Beijing to Moscow last month put the final tick on a bucket list I drew up in 1992. I don’t think the expression ‘bucket list’ had been created back then, but the list I drew up had 15 ‘must do’s’ on it and 13 of them I enjoye...

On my way north through the Solomon Islands and on to Bougainville in Papua New Guinea I flew in to Balalae or Ballalae Island. I spent a couple of nights at nearby Shortland Island before thumbing a boat ride to Bougainville with islanders heading to Buin for the Sat...