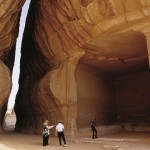 True or False? • The house of the Prophet Mohammed’s first wife Khadijah in Mecca has been demolished and replaced by a block of toilets • The Victoria’s Secret lingerie shop in Riyadh was burnt to the ground by angry matawwa, the Saudi Arabian religious police •...

Gilgit to the Khunjerab Pass Maureen and I have been travelling up the Karakoram Highway (KKH) from Islamabad in Pakistan to Kashgar in China. Part 1 took us to the town of Gilgit, this report continues up to the Chinese border. ◄ Shigar Castle’s security guar...