I’ve been in Mumbai and Delhi in India helping the newest Lonely Planet office – Lonely Planet India – launch their first 10 guidebooks ‘for the Indian Traveller.’ They’re in English, but specifically developed for the rapidly growing Indian overseas travel market. From Delhi I took a train to the Sikh capital of Amritsar, close to the border with Pakistan. 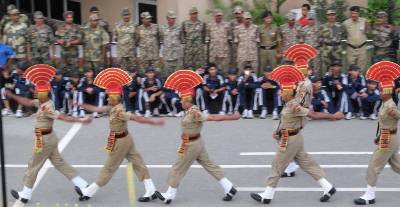 ▲ Their boots came down with a resounding thump. Then there was the briefest handshake across the border before the soldiers spun round and set off on another march clearly inspired by Monty Python’s Ministry of Silly Walks sketch. When you’re wearing a particularly silly hat and trying to kick it off your head Monty Python clearly comes into it. I used to say when wars are decided by whose army dances best my money was on the North Koreans, after I’d gone to a Mass Games in their gigantic stadium in Pyongyang. But after watching the Indian and Pakistan armies dancing around at the nightly Wagah-Attari border closing near Amritsar I have a feeling the North Koreans may only be in the dancing for the bronze medal. 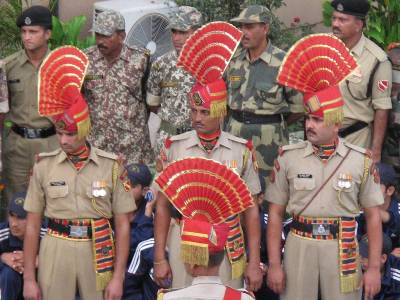 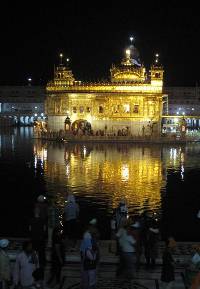 ◄  The border crossing performance has become a major tourist attraction on both sides of the border, but for more serious visitors the great Golden Temple is still Amritsar’s number one. I found a hotel a stone’s throw from the holiest Sikh temple, which made it easy to follow the important advice to visit the temple at different times of day to appreciate its changing appearance under varying light. In fact my afternoon, night and early morning visits could also have been summarised as ‘seeing the temple under different rainfall.’ I managed to get everything from a light drizzle to a monsoonal downpour.

I also managed to fit in another prime Amritsar experience – the free vegetarian meal in the shrine’s Guru-Ka-Langar community dining hall. Everyday 60 to 80,000 meals are dispensed, it’s an amazing production line. I did put a contribution into the donation box against my free meal.

▲ Cooking all those meals also leads to lots of dish-washing, here’s the voluntary dish washing crowd in action. 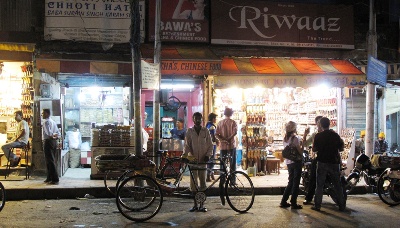 ▲ Wandering the brightly lit, crowded streets of the old city around the temple is another part of the Amritsar experience.

During my spell in Mumbai and Delhi for the launch I said that travelling by rail was an important part of the Indian travel experience. I’d like to say that at least one aspect of Indian rail travel has really gone through a major update, because I’d bought my train ticket on line. Except I hadn’t, despite wrestling hours with the Indian Railway website I failed to persuade it to sell me a ticket. India’s airlines can sell you a ticket in a flash, perhaps the railways need to ask them how it’s done?