Gilgit to the Khunjerab Pass 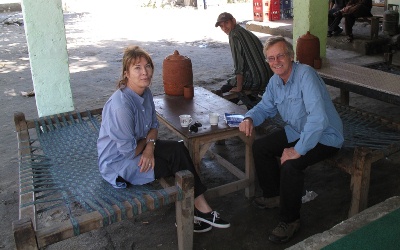 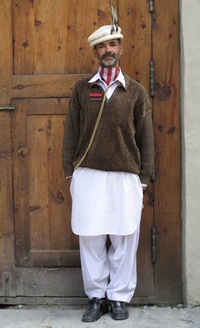 Maureen and I have been travelling up the Karakoram Highway (KKH) from Islamabad in Pakistan to Kashgar in China. Part 1 took us to the town of Gilgit, this report continues up to the Chinese border.

◄ Shigar Castle’s security guard – after our landslide-enforced delay in Gilgit we set out again to Skardu and this time got there without difficulty. We spent a night in the delightful Shigar Castle, a 17th century castle beautifully restored as a museum and boutique hotel. 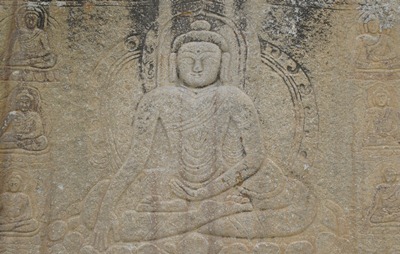 ▲ Our visit to Skardu included a visit to this Buddhist rock carving just outside the town, probably dating back to around the 8th century AD. Then we had another enforced delay, the day of ‘love of Prophet Mohammed’ had caused big problems further south, but villagers had also blocked the Skardu Road and we could not get back to Gilgit. Whether they really had blocked the road I have no idea, but we had to wait 24 hours and then take a Kalashnikov-toting military cop with us as ‘protection’. 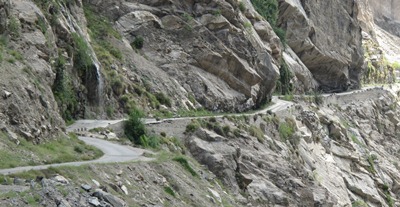 ▲ If anything the Skardu Road is even more spectacular than the KKH itself. 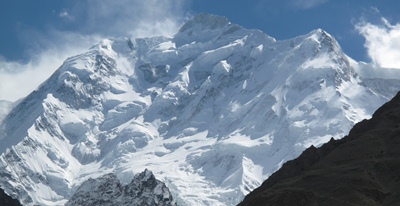 ▲ From Gilgit we continued north past Rakaposhi (7788 metres) which seems to come down to a stone’s throw from the road. It’s noted for its beauty and for its incredible north face, soaring in one unbroken 5800 metre sweep to the summit. We’d already had great views of Nanga Parbat, at 8126 metres the 9th highest mountain in the world. Pakistan has five of the world’s 14 8000 metre peaks including K2, topped only by Mt Everest. Just beyond our Rakaposhi viewpoint we had another landslide delay although this time it only took a couple of hours to clear the road. 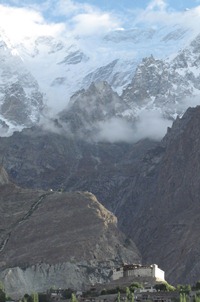 ◄  Karimabad was the highpoint of the Pakistan side of the KKH. A beautiful little town ringed by high, rocky hills and then ringed again by snow-capped mountains. The stunning Baltit Fort overlooks the town and we also made a trip to climb up on the ice of the Hoper Glacier. 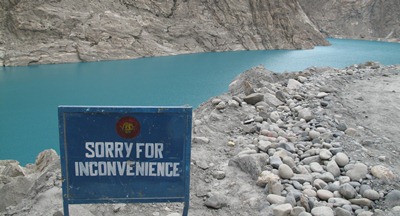 ▲ On 4 January 2010, not far north of Karimabad, a gigantic landslide blocked not just the road, but the entire valley. Including the river. This was not a landslide that could be cleared in a few hours or even a few days. Six months later a lake 22km long stretched back from this instant dam. It had submerged the KKH and its bridges for that distance along with three villages. Yes it was a little inconvenient! 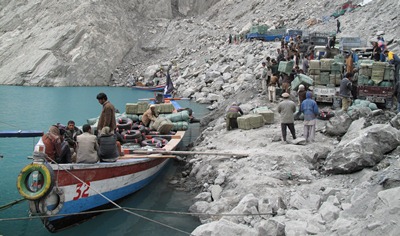 ▲ We left our car and continued the next stretch of our KKH trip by boat. Since the landslide 180 boats have appeared on the lake, most of them big wooden affairs, built by Punjabis and manned by them as well. Twin generator-like diesels sit on a beam across the boat with a long prop shaft, like a Thai longtail boat. We’d just got to our hotel at Gulmit, almost at the end of the lake, when a message came through that the Chinese were going to shut the border for the next 11 days for Independence Day! We had to race on to Sust, a day early, to get across the border before this unannounced closure. 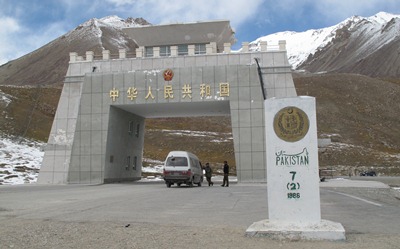 ▲ The Khunjerab Pass at 4724 metres between Pakistan and China. Next report we’ll continue down the Chinese side of the pass to Tashkurgan and on to the old Silk Road centre of Kashgar.