It’s my annual look back at the year’s travels. This year I started with Museums & Galleries, moved on to Cars & Bikes, then Animals & Wildlife, followed by Big Buddhas, 10 Books and finally Beaches. Today it’s my favourite Aerial Views of 2010.

I’ll quote again Joan Didion’s comment in The Year of Magical Thinking that ‘the most beautiful things I had ever seen had all been seen from airplanes.’ Once again, there have been some wonderful views from the airplane windows over the past year. I’ve posted some of my favourites on blogs on flying across the Kimberley in a Cessna Caravan in June and flying from London to Lombok in a Beechcraft 1900D in October. The winding Sangu River as we crossed the coast of Bangladesh just south of Chittagong is one of my favourite aerial glimpses of the year. Here are some others: 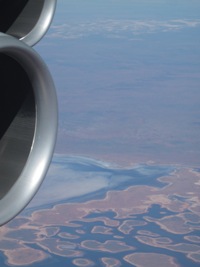 ◄ The long empty stretches of central Australia often features great views, landscapes where you think ‘so that’s where the idea comes from in that Aboriginal painting.’ Followed by ‘and how did they visualize that if they’d never flown over at 30,000 feet?’ This central Australian view was taken from a Singapore Airlines A380.

A few hours later this volcano on the Indonesian island of Java poked through the clouds. Indonesia’s plentiful supply of volcanoes often provide great views. ▼ 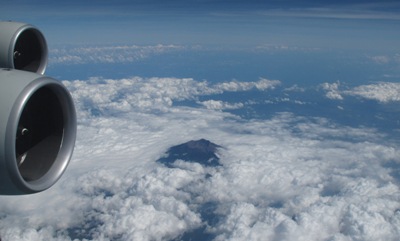 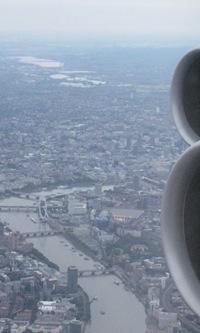 We stopped off in Thailand on that trip, en route to Europe, so Singapore Airlines provided the dawn view of the Thames as we came in to London’s Heathrow Airport. The A380s engines are about to swallow up Waterloo Station and the London Eye ferris wheel. ►

▲ Flying out of Ajaccio, the capital city of the French island of Corsica, there was this glimpse of a cruise ship a ferry and lots of smaller boats in the harbour. Ajaccio was the birthplace of Napoleon Bonaparte and for Christmas Maureen gave me Eau de Gloire, which some after shave dreamer decided conjured up the ‘water of glory’ which Bonaparte might have splashed on if he was trying to seduce Joséphine, rather than announcing ‘not tonight.’ It features hints of maquis the vegetation which covers so much  of the island. 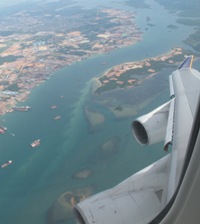 ◄ Finally it’s Singapore Airlines again, but a 747 this time,  a nice view of wings and engines as we descended over the Riau Archipelago into Singapore. The Indonesian Riau Islands lie immediately south of the city-state and their industrialisation is a reminder of Singapore’s ever expanding economic influence in the region.