From Noravank I drove a long way east to Goris where I spent the night and then backtracked and made the winding ascent to Tatev. You can also get up there by the Wings of Tatev Cablecar which gets its place in the records books as ‘the world’s longest non-stop reversible aerial tramway.’ 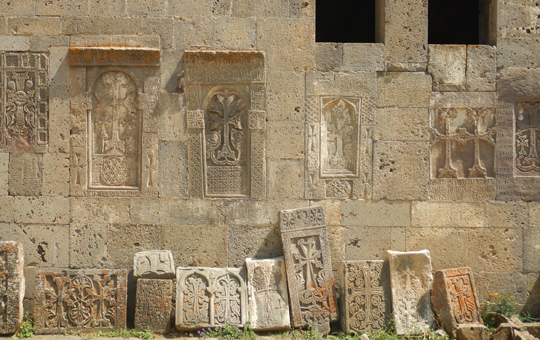 ▲ Tatev has another wonderful old Armenian monastery and church. It’s another one with a notable collection of engraved building stones and khachkars – according to Wikipedia a khachkar is ‘an Armenian cross-stone, a carved, memorial stele bearing a cross, and often with additional motifs such as rosettes, interlaces, and botanical motifs. Khachkars are characteristic of Medieval Christian Armenian art.’ 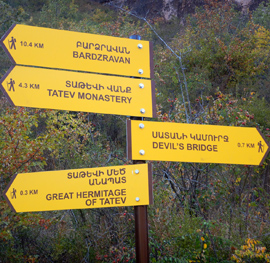 ◄ Tatev is popular for the many walking tracks around the village. I walked down to the surprisingly large Great Hermitage at Mets Anapad and then on to the Devil’s Bridge. From where I hitch-hiked back up to the village, it would have been a dispiriting walk up the hairpinned road to the village so thank you Spartak

The next day it’s back down to the main road and retracing the route of two days ago, but turning off to the Voratnavank St Karapet Church of 1006 which is simply terrific and I am absolutely the only one there at this fantastic site. What a treat. 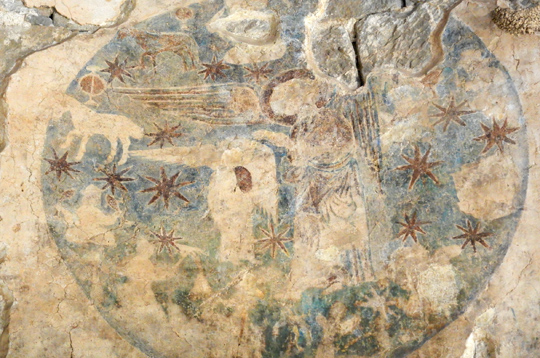 ▲ The church was once decorated with frescoes, one of which survives: ‘in the centre of circle within a diameter of 128cm are portrayed two angels. The circle background is of a deep blue sky studded with stars. Around its perimeter are represented the zodiac signs. Possibly the work of Hovhan Vorotnetsi, renowned philosopher and theologian. In 2011 the wall painting underwent a substantial restoration (cleaning, consolidation, plaster repair and painting touch up) by the sole initiative and funding of Archbishop Arà Zarian and professional art restorer Christine Lamoureux both from Italy.’ 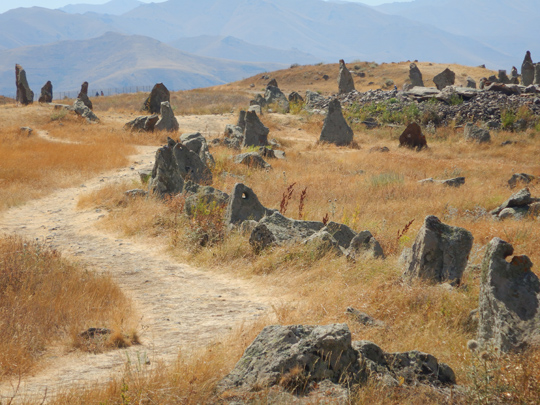 ▲ Not much further west, just beyond the town of Sisian, is the Zorats Karer site which features menhirs, not as impressive as Stonehenge in England or Gobekli Tepe in Turkey, but definitely worth seeing. It’s also known as Karahundj or Carahunge – ‘speaking stones.’ There’s an astronomical significance to the whole place and some of the stones are pierced with circular holes. 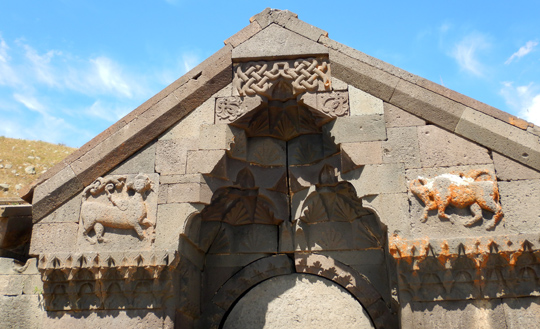 ▲ Further west, returning towards Yerevan, I turn off the route and head north, it’s climb climb climb to the Selim Caravanserai dating back to 1332 although much restored. It’s a nicely solid structure with excellent views, perched just below the summit of the 2410 metre pass. This must be a tough country for cyclists and I’ve seen a quite a few including a couple who have just reached the summit, heading in the other direction to me. Still at least the traffic is light.

From the top of the pass it’s all downhill to Lake Sevan. Only a few months earlier, flying from London to Singapore, I looked out across Lake Sevan to Mt Ararat. 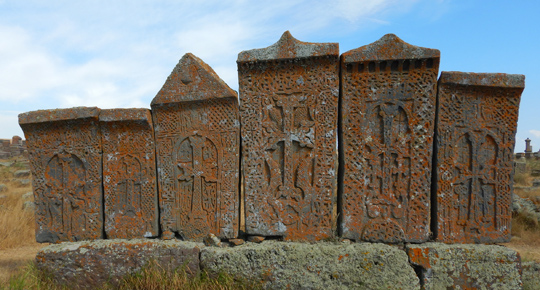 ▲ At Martuni by the lakeside I turn west to Noratus with its huge collection of khachkar cross stones. The shop has an excellent print out you can borrow of a walking guide to assorted crosses. But most of the riveted on numbers on the signposts have disappeared. How hard would it be to paint them on? Give me a tin of paint and a brush and I’d volunteer to do it in an hour.

At Noratus I reverse direction and drive around the lake to my hotel in the village of Tsapatagh, the next day I will have almost completed a circuit of Lake Sevan. 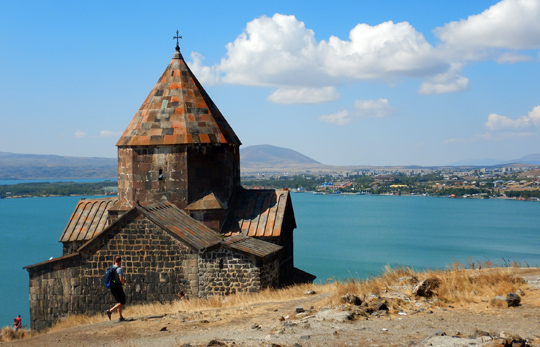 ▲ My final stop is beside the lake, just before I leave it to drive south back to Yeravan. The Sevanank Monastery is not as good as others I’ve seen in the last few days and it certainly has the crowds. Well once again it’s got ‘location, location, location.’