Australia has sailed through the coronavirus pandemic remarkably well despite a short and sharp outbreak in Melbourne (where I live) and the state of Victoria. I looked at just how bad the Melbourne figures were back on 22 August 2020 and then I looked at what it was like in the 5km radius of our severe lockdown on 27 August.

The lockdown must have worked because Melbourne (and Victoria) has now gone 54 days without a ‘local’ case of Covid-19. There have been a handful of overseas arrivals with Covid-19, but there are currently only 10 active cases in the whole state.

And then there’s Sydney, with an outbreak on the ‘Northern Beaches,’ the Pacific coastline of Sydney to the north of Sydney Harbour. Although it looks like they’re getting it under control – there were only 8 new cases today – there are all sorts of restrictions in place around the country. Don’t think of coming to Melbourne for Christmas if you’re from Sydney for example. 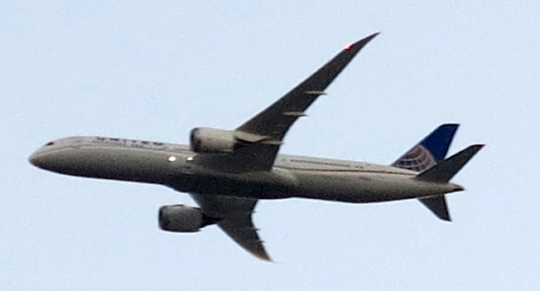 ▲ A United Airlines 787 arriving in Melbourne from Los Angeles

So how did the Sydney outbreak start? Airline crews perhaps? Nobody is saying but the Sydney Morning Herald reported that ‘A United Airlines crew member who arrived in Sydney with COVID-like symptoms on Monday was released from hotel quarantine within 24 hours despite a request from health authorities for more time to perform further testing.’ It was reported that a ‘government source with knowledge of the events said the woman was released to fly home to the US after lobbying by an airline executive, despite NSW Health quarantine teams wanting to retain her for a second test.’

So did the Sydney outbreak arrive via United Airlines? Nobody is saying that, but the state government has announced that instead of staying in 25 or 26 hotels (depends on the story) airline crew will now stay in just 2 hotels near to Sydney Airport so that the police and NSW health can keep an eye on them and ensure there is no ‘disobedience.’ Disobedience?! Yes, flight crew from a LATAM Chile flight were fined A$13,000 for breaking quarantine rules. Flight crew are not subject to the strict 14 day rules that the general public face if they arrive in Australia, they don’t have to stay in their rooms and it’s only until their next flight out, but clearly there are rules.

Of course putting all flight crew into just 2 hotels could bring its own problems. A ‘major airline source’ said ‘You’ve got airlines from low-risk countries who are now going to be housed in basically the same space as airline crew coming from COVID-19 hotspots.’ Too true, if you’d just flown in from somewhere safe like Hong Kong, Singapore, New Zealand or Fiji (I’ve just checked flights into Sydney today) would you want to be rubbing shoulders with some of those Chileans from LATAM? Or even worse Americans off a United flight?

The travel newsletter Skift has just published an article – United Promises to Leave No Covid-Infected Pilot Behind – about the lengths the airline will go to in order to ‘extract’ virus infected crew.