How big do the numbers have to be to for things to be really bad? Here’s a Victoria (state of Australia), Florida (state of USA), UK comparison.

I’m 20 days into the Australian state of Victoria’s ‘State of Disaster’ lockdown – so tomorrow we’re half way into our six week lockdown. Lockdown means we can only leave home for certain reasons – one shopping trip a day, one hour of exercise, or assorted special reasons, medical for examples. The shopping trip or exercise exit cannot take us further than 5km from our front door. I’ve been cycling around the 31.4km circuit of that 5km radius from home. There’s also a curfew, we can’t venture outside from 8pm to 5am. When I do venture outside during those circumscribed hours I must wear a mask at all times. There’s a A$200 fine for not wearing a mask, A$1652 for venturing beyond the 5km boundary or out of curfew.

So what prompted our disaster lockdown, how bad were things in Victoria? Australia’s original Covid-19 peak was 368 cases on 30 March – that’s a seven day moving average (7DMA) and on a cases-per-million basis that’s a figure of 14. Now compared to a lot of places in our virus-infected world that’s nothing at all. Today – 22 August – the 7DMA number per million for the UK is 15 and for the USA 137, both numbers are a big decline from their national peaks, the UK 73 on 14 April, the USA 209 on 25 July.

After that first peak Australia kept the virus pretty much at bay for two months, consistently down to zero in some states and on the odd day down to zero in Victoria as well. Then in late June to early July the numbers began to ramp up again, but predominantly in Victoria. When the number of new cases in Victoria got beyond 600 a couple of times in late July and early August – that’s over 90 new daily cases per million population – our State of Disaster lockdown kicked off. A few days later we hit 694 new cases on 5 August, but subsequently the number has started to drop and our 7DMA of new cases per million population is now at 35. So clearly our lockdown seems to be working? That’s actually just below New York State’s number today, at its peak on 10 April the US state’s 7DMA for cases per million population was over 500, if New York State had been an independent country it would have been the worst place in the world. 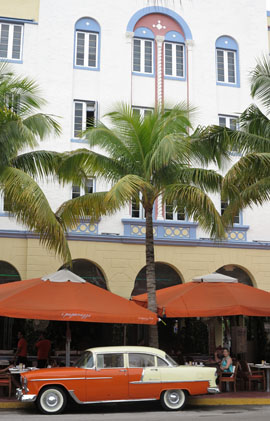 ◄ South Beach Miami, Florida on my most recent visit

Today Florida’s 7DMA number per million population is 199, on 17 July the Florida figure was 552 so if I’m living in a ‘State of Disaster’ Florida even today must be a ‘State of Disaster’ on steroids and a month ago it would have been on super steroids. Yet Disney World is open although the resort website warns that ‘By visiting Walt Disney World Resort you voluntarily assume all risks related to exposure to COVID-19.’

So what about Europe? The news there has been the UK slapping 14-day self-managed quarantine stays on citizens returning from countries which Prime Minister Boris Johnson’s government has suddenly decided are risky.

UK numbers are calculated as total new cases per 100,000 population for a seven day period and on that basis the danger number is 20. Translating that to daily cases per million means 29 is the red flag number. As of today Spain is at 70, France at 49 and the Netherlands at 31, all three are on the UK’s ‘go home and don’t come out’ list. Of course in the UK you have to look to Dominic Cummings, Boris Johnson’s adviser, for how to treat ‘self-managed quarantine.’

So how bad is bad, in daily new cases per million population?

• Bad enough to be locked down in a State of Disaster in the Australia state of Victoria – 90 although we’re now down to 35. Australia as a whole is still less than 10.
• Bad enough to go into quarantine when you get home to the UK – 29
• Not so bad that Disney World can’t open – 428 – that was the Florida new cases per million 7DMA on 11 July when Disney World started to reopen. Things continued to get worse in Florida for another six days after the reopening.