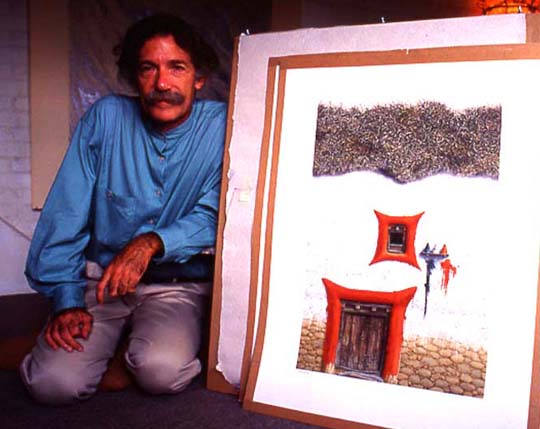 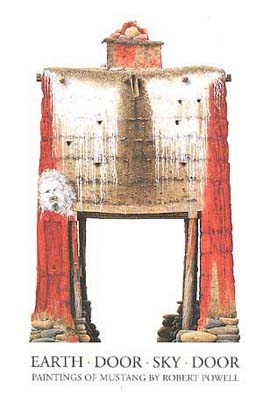 ▲  Robert Powell in Kathmandu in 1999 with a painting of a house front in Mustang. The Australian architect-artist died just before Christmas – on 16 December. The Nepali Times underlined his importance to the Himalayan region in a lengthy obituary written by Linda Kentro and James Giambrone, founders of the Indigo Art Gallery in Kathmandu. In the year before his death Andrei Jewell made a documentary Enchanted Matter about his life and extraordinary work.

◄ The Passage through Tsuk – the narrow passage between houses in the Mustang village of Tsuk beside the Kali Gandaki river.

After studying architecture in Sydney Robert spent most of his life in various regions of the Himalaya, particularly in Nepal where he lived in Kathmandu for 30 years. I’ve often thought a Powell print of a Nepali scene – whether it’s a classic Kathmandu building, a bicycle laden with giant radishes or a herd of brightly painted goats – is almost the standard souvenir of Nepal. Many visitors will have a Powell print on their wall even if they’re not familiar with his story

Mustang is the almost legendarily remote Tibetan region of Nepal, north of Jomsom and on the border with Tibet. Like Ladakh in India, Mustang lies beyond the Himalayan watershed on the dry Tibetan plateau. Today Mustang and Ladakh, which has also been a focus for Robert’s work, preserve Tibetan life and culture in a more pure form than in Tibet itself, which has been subject to the onslaughts of Chinese influence.

I flew to Jomsom and walked up to Mustang in 2011 and covered the walk in two blogs – Part 1 and Part 2. Ten years earlier in 2001 I’d made the three week Annapurna Circuit walk, after crossing the Thorong La pass the trek pauses in the village of Khagbeni. From there you can turn north to Mustang – if your permits are in order – or south to Jomsom and then Pokhara. 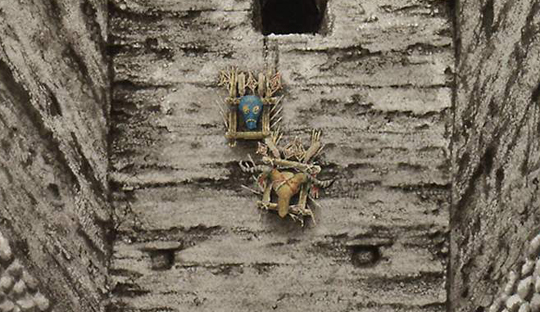 ▲ Unfortunately my visit to Mustang didn’t take me to the village of Tsuk, a pity because I’ve got Robert’s painting of the village on my wall. It’s a classic example of the Earth.Door.Sky.Door connection. The painting –  in a tiny glimpse towards the bottom of the work – illustrates the sago namgo protection from the evil spirits of the sky and the earth. The blue dog skull closes the door to the sky and keeps its demons out of the house. The ram’s skull offers the same protection from the demons of the earth.

Later Kathmandu’s escalating pollution drove Robert and his wife Lieve out of the Nepali capital and he built an amazing house in the hills of the Thai island of Ko Samui. His work now included equally detailed studies of Angkor Wat in Cambodia and jumping back to his original career as an architect Robert designed the beautiful Kamalaya Resort, a combination of boutique beach resort and health retreat.