The Heads, The Rip & Pope’s Eye


Flying from Melbourne down to Tasmania, Australia’s island state, the other day my flight went right over The Heads, the narrow entrance into Port Phillip Bay.  The Rip, the narrowest part of the entrance, is one of Australia’s most hazardous port entrances, a place where the expert guidance of a ship’s pilot is really necessary. The Rip is just three km wide, and as the tide changes the water racing in and out of the almost 2000 square km bay really does ‘rip’. 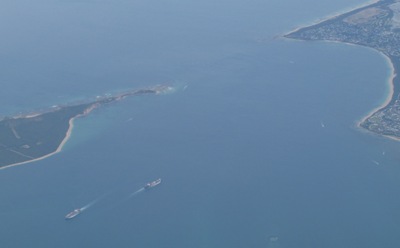 ▲ Passing cargo ships, one has just entered the bay, the other about to depart.

◄  I could also see Pope’s Eye, a familiar locale for scuba divers. Bluestone boulders were dumped at Pope’s Eye in the 1880s to form the foundations of a fort. The Crimean War (1853-1856) had raised the possibility of a Russian invasion, but the fort was never finished, the invasion never happened and today it’s scuba divers, seabirds, Australian fur seals and bottlenose dolphins which enjoy the amenities. Like many Melbourne scuba divers I did some of my first open water dives at Pope’s Eye.