Trains hate going up or down hills, their metal wheels spin on the metal rails, 1 in 25 (a 1 unit rise for every 25 units travelled) is probably about as steep as you’d want. So planning a train line along the King River between the Tasmanian mining town of Queenstown and the port of Strahan required some tricky engineering. 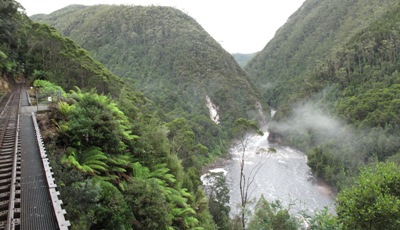 ▲ Terrific views as the line follows the King River through lush rainforest.

The answer was an Abt line, a rack-and-pinion system invented by Swiss engineer Roman Abt. Most cars today have rack-and-pinion steering. When you turn the steering wheel the pinion (a cogged gear at the end of the steering column) turns the rack and hence moves the steered wheels from side to side. Abt’s railway system comprised a rack between the two regular rail lines and a pinion driven by the locomotive to virtually wind the train up the hill. The first section of the Mt Lyell line opened in 1896 and the completed 35km track wound its way through the dense rainforest and operated right up until 1963. By then a road had been completed and road travel was far faster and cheaper. The abandoned railway line with its 40 bridges soon deteriorated and collapsed. 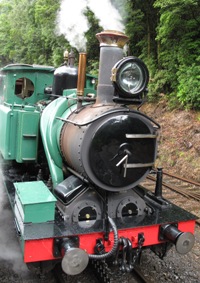 Recently a big cash injection reopened the line and today beautifully restored steam trains chug up and down the stunning line. It’s strictly a tourist route, you can drive between Strahan and Queenstown in an hour, the train takes more than three, but it’s a great trip, the views are terrific, there are regular stops (the old steam trains need more water at frequent intervals) and the Abt rack runs for 8km up and over the steepest section. 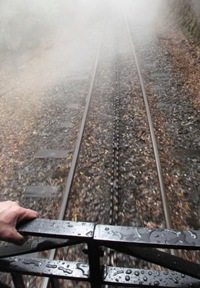 ◄ From the open platform at the rear of the first class carriage you can see the Abt rack down the centre of the line.

The West Coast Wilderness Railway operates up to four time a day at the height of the summer season. Fares range from A$107 in the Tourist Carriage to A$210 in the Premier Carriage. The classy carriage features an open platform at the back, great for views back along the line.