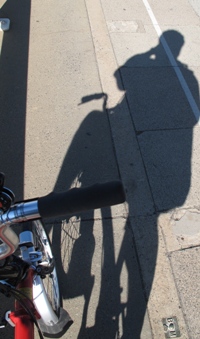 ◄ My shadow and my fold-up-Brompton bicycle beside Lake Burley Griffin in Australia’s capital Canberra. I was in Canberra to do a talk for the government’s Intellectual Property Australia organization, brought my bicycle with me and did something I’ve been meaning to do for awhile, ride around Lake Burley Griffin.

The National Portrait Gallery in Canberra – when it opened in December 2008 a photo of Maureen and me hung on the walls, right next to Rupert Murdoch. Both photos have gone from gallery to storeroom! ▼

The lake circuit was much further than it looks, I’d glanced at a map and thought ‘oh 4 or 5km in one direction from the centre, another 4 or 5km in the other.’ The correct distance turned out to be 17 or 18km in each direction, a 34km circuit in all. But there’s plenty to see including, I’m fairly certain, a quick glimpse of a platypus as soon as I arrived at the lakeside. I couldn’t believe it, but Australia’s capital does indeed have them in its artificial lake.

▲ Australia’s copy of the Angel of the North statue. 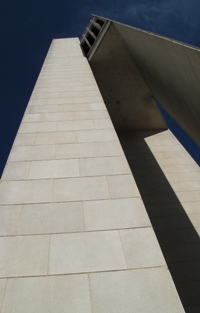 ◄ The Carillon with its 55 bells.

The dam which created Lake Burley Griffin was only built in 1963 and its construction proved that Canberra had finally arrived. Canberra’s construction commenced in 1913, as a ‘neutral’ capital between those fierce rivals Sydney and Melbourne. In the mid-1950s, when Canberra was officially 40 years old, the city was still a non-starter. ‘The ruins of a perfectly good sheep station,’ was one of the cruel descriptions of the unloved and unexciting city.

Prime Minister Robert Menzies, often castigated for being the source of everything dull and conservative about 1950-60s Australia, finally bit the bullet and pushed through a new attitude about the capital. Today it’s a city of museums, galleries and assorted tourist attractions, as well as government, just like Washington DC. 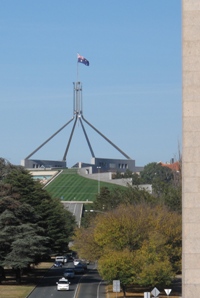 My bicycle ride took me past the new National Portrait Gallery, assorted artwork including a working model for England’s iconic Angel of the North, the Carillon bell tower, the 1858 Blundell Cottage, a reminder of Canberra’s pre-capital farming history, and the wonderful Australian Museum.

◄ I started and finished near the Australian Parliament. 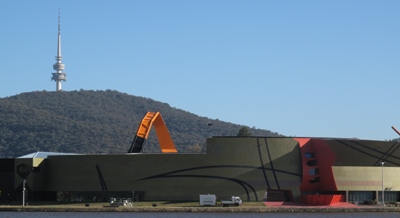 ▲ The Australian Museum. If you don’t bring your own bicycle you can rent one from Mr Spokes, but check the opening time, they aren’t open every day except during the peak tourist seasons.

▲ Canberra wasn’t my only recent bike ride, I also followed the Murray to Mountains bicycle trail which tracks a disused railway line route in the Australian state of Victoria. I rode the 72km trail from Beechworth down to Bright.