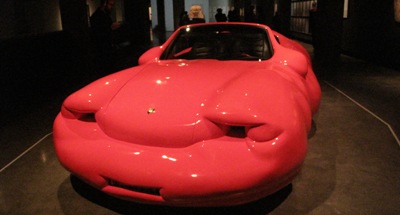 Maureen and I were in Tasmania with some friend just before Hobart’s amazing new MONA – Museum of Old & New Art – opened in January. It’s the creation of David Walsh who made his considerable fortune from gambling. Not that chasing-the-horses, spin-of-the-roulette-wheel or impassive-poker-stare gambling, Mr Walsh’s gambling was all based on huge amount of mathematical probability work and clever computer modeling. The Bilbao Guggenheim museum has become the symbol and major attraction of the Spanish city, I’ll put money on MONA having the same impact on Hobart in Australia.

Plus, for the opening exhibit at least, there’s a nice smattering of controversial works – 150 porcelain reproductions of female genitalia – eye-catcher’s like Erwin Wurm’s Fat Car or Julius Popp’s beautiful Bitfall which fountains out a changing series of words from today’s news. ▼ 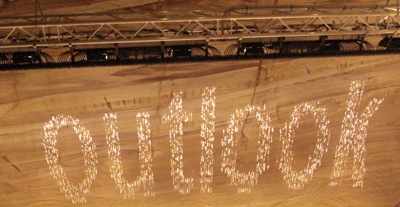 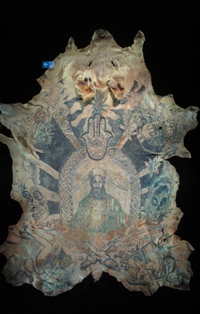 Internationally there’s a surprising amount of modern art from Russia and some usefully controversial work like a portrait of Osama bin Laden on a pigskin. ►

A star attraction at the opening Monanism exhibit was Wim Delvoye’s Cloaca Professional, his provocative shitting machine – it’s fed at 11 am and 4 pm daily (‘good looking food from the café,’ reported the gallery guide) and shits at 2 pm daily (‘smelly’ report onlookers). ▼

▲ You can travel to and from MONA on a regular ferry service up the Derwent River from Hobart’s harbour. Coming back down river in the late afternoon sunlight under a threateningly dark sky the Hobart Zinc works looked like an art creation as well. In front you can see the INCAT (International Catamaran) workshops with a giant new catamaran ferry bound for Argentina’s River Plate under construction.