I’ve got three bicycles and only one of them is coming with me to Africa for my leg of the Tour d’Afrique in March. 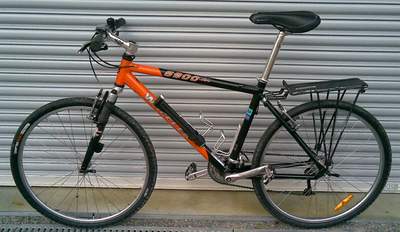 That’s my Wheeler 5900 ZX mountain bike. I bought it in 1997, it was made in Taiwan, 24 speed and I’m running it on road tyres, although I may take a set of mountain bike tyres to Africa with me. 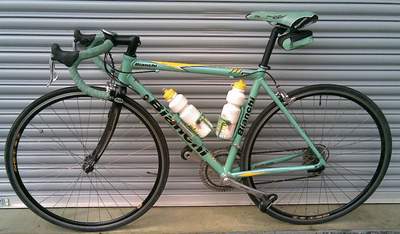 Then there’s my Bianchi, an Italian road bike with some carbon fibre components although since I bought it in 2002 lots more carbon fibre has appeared on high end bikes. This one is 18 speed and if my Wheeler is my bicycle Land-Cruiser then this is my pedal Ferrari. 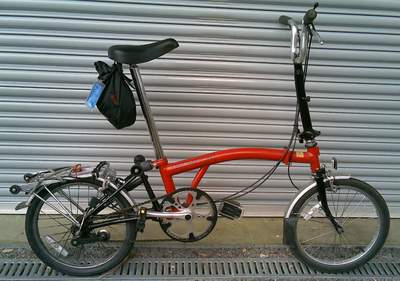 Finally there’s my Brompton, this is the city bike, my two-wheel, pedal-powered Smart car. I bought my very English Brompton in London in 2001 where they’re extremely popular because no bicycle folds up smaller than a Brompton. In fact unfolding it or folding it up and watching people’s reaction is one the great pleasures of owning a Brompton.

It’s got just three speeds – gears by Sturmey Archer no less – and although you wouldn’t want to cover any great distance on a Brompton it gets along surprisingly well.

So let’s do a comparison test. I’m doing some of my Africa training rides along the river and creekside tracks of Melbourne. A favourite quick practise run is to start from my home in the Melbourne suburb of Hawthorn, ride out along the Yarra River to the Walmer St footbridge and cross over to the start of The Boulevard, a curving, undulating road (built as a depression-era work project) that runs for 6km high up above the Yarra River. There’s enough long uphill stretches to test your legs and one uncomfortably steep climb away from the river to the start of The Boulevard. Total door to door distance: just under 23km. So how do the bikes compare:

If you’re serious about speeding Bromptons there’s an annual Brompton World Championship in September in the UK in which competitors have to unfold their Bromptons before racing off on a 14km course. Properly attired of course, male competitors are expected to wear jacket, shirt and tie, none of that tight lycra stuff.