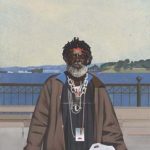 The National Portrait Gallery in London (half way between Leicester Square and Trafalgar Square, right behind the National Gallery) is one of my favourite London museums or galleries and each year the BP Portrait Award – ‘the most prestigious portrait painting competi...

◄ My shadow and my fold-up-Brompton bicycle beside Lake Burley Griffin in Australia’s capital Canberra. I was in Canberra to do a talk for the government’s Intellectual Property Australia organization, brought my bicycle with me and did something I’ve been meaning to ...

I've been posting some 'end of 2009' lists in an assortment of categories, starting with Aerial Views, then with Hotels (good and bad), Other Transport, Music, Cars & Drives and today it's Galleries & Museums. One of the pleasures of life in any big city is...