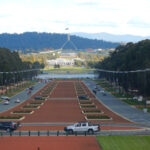 It’s Australia’s capital city, strategically sited between the two big cities – Sydney and Melbourne – so it doesn’t upset either of them. Like Washington DC and assorted other capitals it was planned that way, it’s not a city like Paris or London where its role as a ...

Last year I blogged about visiting the National Library in Canberra, Australia and finding out about enclaves and exclaves along the borders between India and Bangladesh and between Belgium and the Netherlands. While I was in Belgium continuing my pursuit of King Le...

Before my recent trip up the Karakoram Highway through northern Pakistan to Kashgar in China I spent a day on a side trip to the Murree hill station and looking around Islamabad. On my last visit to Pakistan in early 2006 I went to the ancient Buddhist site at Taxila,...

◄ My shadow and my fold-up-Brompton bicycle beside Lake Burley Griffin in Australia’s capital Canberra. I was in Canberra to do a talk for the government’s Intellectual Property Australia organization, brought my bicycle with me and did something I’ve been meaning to ...