We’re currently having another virus scare in Australia. On 23 December I looked at the Northern Beaches outbreak in Sydney, possibly arriving via US airline crew. That’s prompted a border closure between New South Wales (Sydney) and Victoria (Melbourne).

One of the less popular elements of the UK’s virus lockdowns was the sudden institution of instructions to ‘get home now or you’ll have to go into isolation for 14 days.’ Typically ‘get home now’ seemed to mean by 4am tomorrow or something equally unpleasant. So that seemed to be a good game for the Victorian state government to try, suddenly the border from NSW to Victoria was closed (going the other way was fine) and very possibly it’s going to stay that way until the end of January. So if you went on a quick trip to Sydney (or even to some other part of NSW which has seen no cases at all) and didn’t rush back in time you now can’t come home for a month. There isn’t even the option of coming home and going into quarantine, the rule is ‘stay away.’ 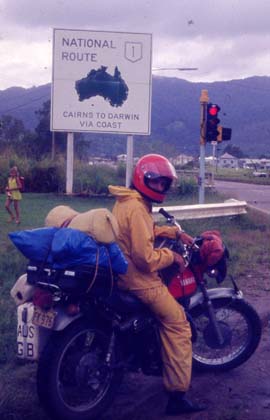 ◄ Me on my Yamaha DT2 riding from Melbourne to Darwin on Highway 1 back in 1972.

Every state in Australia seems to have its own rules and they can change from day to day, but currently travelling from Queensland (the Gold Coast, Brisbane, Noosa, the Great Barrier Reef) to Victoria is OK. Except how do you get back home if you drove up to Queensland? NSW is in the way and although there’s talk of giving people permission to drive straight across NSW with minimal stops, skirting around the state isn’t easy. Look at a map of Australia, there’s Highway 1 which runs 14,500km (9000 miles) right around the country, that’s longer than the Trans-Siberian Highway or the Trans-Canada Highway.

In the middle of the country there’s the Stuart Highway making the 3000km connection between Adelaide in the south, via Alice Springs in the centre to Darwin in the north, but that’s about it. If you wanted to travel directly west from Alice Springs to Western Australia (capital Perth) you can contemplate the Tanami Track or the Gunbarrel Highway. Coming from the east coast, well the Donohue Highway and Plenty Highway is partially sealed, but you’ll definitely need 4WD if you’re going to get across the sand dune known as ‘Big Red’ and cross the Simpson Desert from Birdsville in Queenslands, Australia’s most remote town. 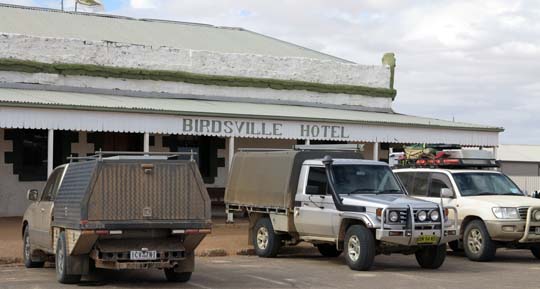 But if you want to drive straight back from Brisbane in Queensland to Melbourne in Victoria and can’t go directly across NSW (1664 km and 18 hours 12 minutes according to Google Maps) then you better start thinking about Birdsville. You’ll need a 4WD or at least something with good ground clearance and (Google Maps again) you’d better allow 46 hours for the 4000km trip.

The Brisbane Times ran a story on people taking the adventurous way home along with a warning from the Birdsville Hotel that ‘Google Maps does not show the routes as unsealed roads, so people actually don’t know it’s dirt until they hit dirt.’ Better be prepared was the message. The 519km of the Birdsville Track from Birdsville to Marree in South Australia is the tough part of the drive. 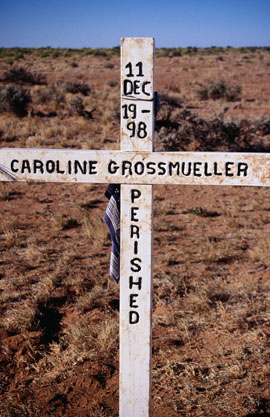 Fortunately you’re not likely to die on the Birdsville Track these days. The famous Birdsville death was way back in 1963 when the Page family of five ran out of petrol and all died before help came. In fact you don’t die on outback tracks in Australia, you ‘perish’. Usually from thirst. In 2000 I came by this lonely marker near Lake Eyre in South Australia. Things went wrong for Caroline Grossmueller and she ‘perished’ before anybody came by. I’ve driven along that same road a couple of times – but not at the height of summer like she did. I flew to Lake Eyre in 2019 to see the lake in flood, usually it’s a dry salt pan.

Oh, and how bad are things in Sydney and Melbourne? Today’s Covid-19 figures are 6 for Sydney and 0 (yes zero) for Melbourne. For comparison purposes the USA today was 260,973 while the UK was 62,322. So why are our borders shut?