Lake Eyre is in flood, it happens when huge rains – like from Cyclone Trevor in Queensland in early 2019 – the water heads south-west towards the vast salt lake. Click here for the weather bureau’s story on this year’s floods. I wrote about the process in 2017, writing about Paul Lockyer’s book Lake Eyre: Water coming in to the lake takes a long time to get there, rivers have to fill, waterholes have to flood, it’s a step by step process that gradually gets the water there. Then it comes alive, suddenly frogs, fish, crustaceans which have laid dormant since the last flood come to life. Birds appear, somehow the message gets out that the lake is alive and waterbirds – particularly pelicans – flock in from all over Australia and further afield. Even the Lake Eyre Yacht Club comes alive and its sailors flock to the lake. Then the inflow stops, the lake dries and the desert reappears.

So on the weekend of 25-26 May I joined a small group with Kirkhope Aviation to visit Lake Eyre and fly over the flooded lake. I’ve seen it before, in 1993 Maureen and I drove down the Oodnadatta Track to William Creek, the jumping off point for visiting the lake. At that time it was completely dry, but we drove out to the edge of the salt lake. Seven years later in 2000 I was there again with travelling companion Don Whitford, but this time it was in flood and we drove out to the lake edge, but also took a flightseeing trip across the lake from William Creek. The tiny settlement’s airstrip was crowded with light aircraft taking visitors out for a look. 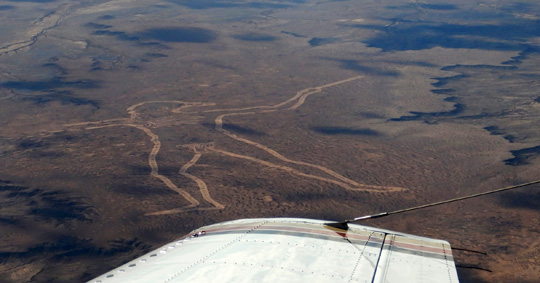 ▲ This time we flew from Melbourne, via Mildura and Rawnsley Park in the Flinders Ranges and then on past Marree Man, an Australian version of those huge chalk figures of southern England, except this geoglyph is 2.7km tall, much bigger than any English chalk figure. Also known as Stuart’s Giant it seems to have been created in 1998, but nobody knows who did it. It’s been the subject of disputes over ownership, since it’s on indigenous land, but exactly whose? And is it graffiti, environmental vandalism, or what? Whatever the story it was worked over with a grader in 2016 so it’s going to be there for some time. 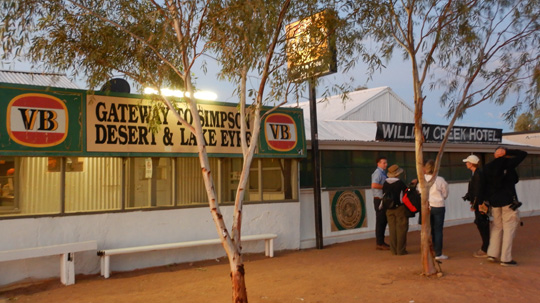 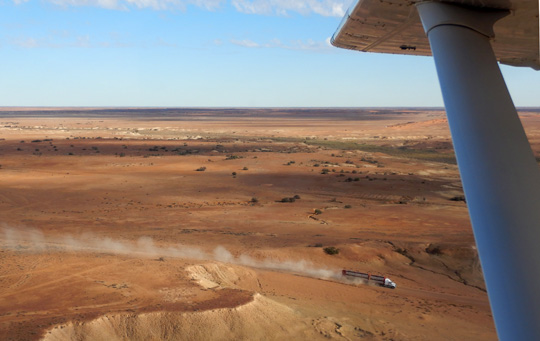 ▲ We took off from William Creek in a local flightseeing aircraft as a westbound truck trailed a dust cloud into the town. In 2011 a new airstrip was opened at William Creek, the dirt airstrip from my visit in 2000 has become a real little airport and we were told there were currently 26 pilots station at William Creek for all the tourists. 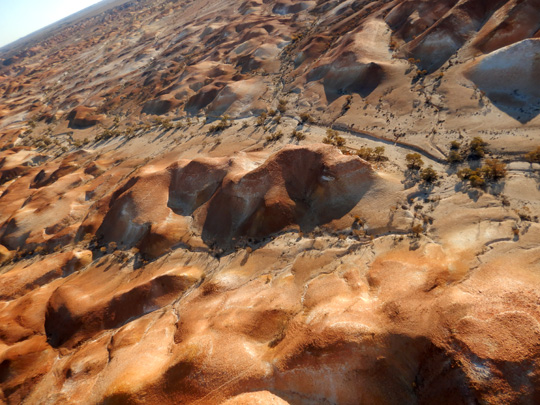 ▲ Our local flight took us south over the Anna Creek Station to the Painted Hills, they reminded me of the Kalahari in Bostwana. ‘No,’ Maureen said, ‘Lo Manthang in the north of Nepal, near the border with Tibet.’

▲ The next day we flew out over Lake Eyre North, this is Silcrete Island, one of the ‘ephemeral islands’ that appear when the lake is in flood. I’ve got an Ephemeral Islands on Lake Eyre chapter in my book Islands of Australia coming from the National Library in October.