My recent central African trip kicked off at Lubumbashi in Congo DRC, continued on to the capital Kinshasa, jumped across the mighty Congo River to Brazzaville in the Congo Republic, then headed upriver to Kisangani, the town on the ‘bend in the river’. Finally I continued east to Goma to track gorillas and climb the amazing Nyiragongo Volcano. I’ve also posted some Congo Information on the practicalities of travelling in the region and commented on how lucky I was not to have flown on Hewa Bora airlines a week or so later than I did.

That completed my Congo travels, but to get back to London I hopped across the border into Rwanda and flew out of Kigali, the country’s capital. The border crossing into Rwanda was a breeze, I’d been put through more paperwork, form stamping and bureaucratic hoops travelling from one town to another in Congo DRC than it took to cross this international border. And Rwanda certainly provided a dash of culture shock, 100 metres into Rwanda I’d travelled on more smooth, sealed, unpotholed tarmac than I’d seen in the past four days in and around Goma on the Congo DRC side of the border. 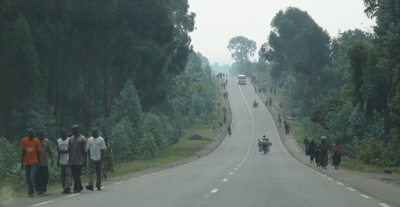 ▲ That well surfaced road continued all along the three hour drive to Kigali. It’s intensively farmed and always busy all the way. For most visitors Rwanda’s big attraction is gorilla tracking in the Parc National des Volcans, but I’d already seen gorillas across the border in Congo DRC so most of what I saw in my brief visit related to the genocide which devastated the country in 1994. The Kigali Memorial Centre documents the story of the genocide and how 800,000 (out of a population of 8 million) died, but without answering half the questions I had about the events. 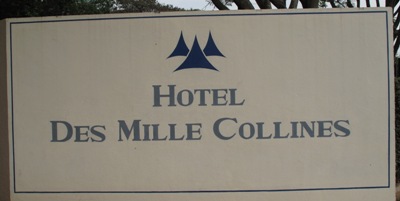 ▲ Right in the town centre nothing at the Hotel des Milles Collines (the Hotel of a Thousand Hills) speaks of its role in the genocide story, but this was the actual ‘Hotel Rwanda’ in the film of that name.

I also travelled south from Kigali to the villages of Ntarama and Nyamata. In both villages the population barricaded themselves into their churches, in both places the killers battered their way in and slaughtered everybody. At Ntarama there are racks at the back of the churches with skulls and bones neatly lined up while the victim’s clothes are piled up at the walls. There are holes in the brick walls where they broke inside. At Nyamata the bones are in basement crypts behind the church, but again the clothes are piled up inside. For some reason it’s the jumble of clothing which is most moving. At Ntarama it was machetes and purely physical killing, guns and grenades were used at Nyamata. The deaths? Oh 5000 in the church in Ntarama, 10,000 in Nyamata, thousands more outside. 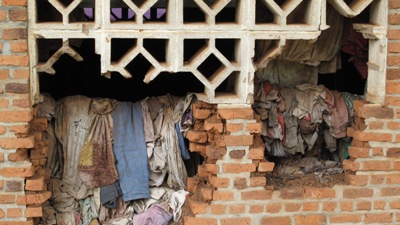 ▲ In the church of Ntarama genocide victims’ clothes are visible through holes broken through the walls by their killers.