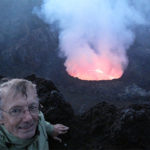 The active Nyiragongo Volcano overlooking the town of Goma, close to the border of Congo DRC and Rwanda has been erupting. I climbed the volcano back in 2011 and visited the gorillas in the nearby Virunga National Park. ▲ The eruption reports indicated that the ...

Last year I blogged about my travels around the Congo (the big, bad Congo DRC although I also hopped across the border – the Congo River – to Congo Brazzaville). Plus I read the best book to read about the Belgian colonial horror story – King Leopold’s Ghost. On my...

What is it about the Congo which inspires such great writing? Whether it’s powerful novels (from Heart of Darkness via A Bend in the River to Poisonwood Bible), shocking history (King Leopold’s Ghost to In the Footsteps of Mr Kurtz or Dancing in the Glory of Monsters)...

◄ Palestine is one of those unusual countries without a McDonalds and when the big brands aren’t present you can be pretty certain some strange replacements will pop up. Like Ramallah’s Stars & Bucks coffee shop, right in the centre of Palestine’s de facto capital...