I spent several weeks kicking around the two Congos with stops in Lubumbashi, Kinshasa, Kisangani and Goma in Congo DRC and a sidetrip to Brazzaville in Congo Republic. And then I went on to Rwanda to finish my trip. Along the way I also got a great view of Kilimanjaro, posted some suggestions on Congo Travel and commented on flying Hewa Bora Airlines.

A couple of years ago I rode the Tanzania-Malawi stage of the annual 4 month long Tour d’Afrique and blogged about part 1 from Iringa down to Lake Malawi and part 2 on to Lilongwe. There’s also an LPTV video clip on the ride. 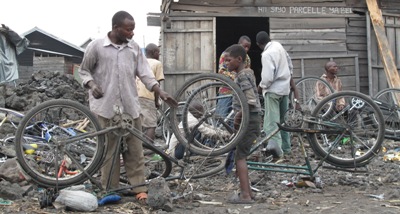 ▲ So I like bicycles and they certainly get used in Africa and Congo in particular. This bicycle repair shack was in Goma on the border with Rwanda. Check Bryan Mealer’s book All Things Must Fight to Live for an epic 8 day bicycle ride through the Congo jungle.

Motorcycle taxis, boda boda, as they’re called in much of East Africa, are a popular way of getting around and I certainly covered some km on the back of motorcycles while I was in Congo. Kisangani also features bicycle taxis, you just hop on the little carrier seat on the back and off you go. Note the bicycle in front is toting two passengers, there’s a second woman perched on the crossbar. ▼ 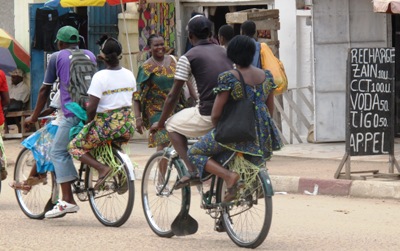 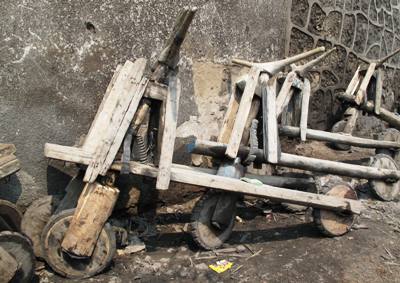 ▲ Around Goma you see an enormous number of these amazing wooden bicycles known as tschukudu. They’re strictly pushed if they’re not coasting downhill (with surprising speed) and are used for carrying goods, not for personal transport. They’re fascinating for their sheer crudity and yet they’re all the same, varying only in size. I never got an opportunity to study one closely, but they must weigh a ton. Goma is down by the lake, the fertile farmland around the town is all at higher altitude, so tschukudu riders roll downhill to the town, laden down with vegetables, and then push them back out uphill.

▲ Tschukudu can carry almost anything, like this load of planks.