I’ve been posting some ‘end of 2009’ lists in an assortment of categories, starting with Aerial Views, then with Hotels (good and bad), Other Transport, Music, Cars & Drives, Galleries & Museums, Books and Animals & Wildlife. Today it’s my photographs of 2009.

These are not my ‘best’ photographs of 2009, but they’re some of the images which remind me why I still love to travel. The experiences that you only get when you’re on the road and going somewhere. 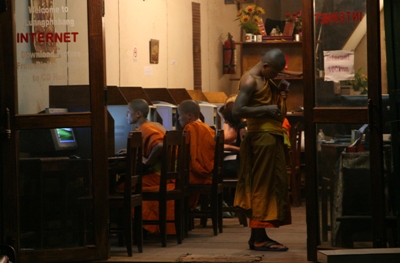 Like so many backpacker centres Luang Prabang is dotted with internet cafes – or restaurants offering free wifis for those who tote their laptops on the road. Wandering back to my hotel one night I glanced into this internet cafe to realise the clientele, bent over their keyboards and screens, were all Buddhist monks in their orange robes.

It was life on the road which made my African bicycle ride so much fun. There always seemed to be kids waving at you, but I must have arrived in this village in Malawi right on school break time. The kids lined the road, waving and shouting.

I had to overnight in Copenhagen in Denmark en route to the Faroe Islands and after dinner dropped into the Copenhagen Jazz House for a cold beer and an energetic session by a local band Looter Beats.

These beautiful little offerings were lying on the ground at the door of a shop on Monkey Forest Rd in Ubud in Bali. Because they are left at ground level it’s clear they’re not intended for the gods. These are pay-offs, bribe, to evil spirits or demons. To ensure they stay outside, don’t enter the shop and cause mischief. Or poor sales.

We’d only arrived back in London from Los Angeles the previous day, but there was a concert on in Newcastle upon Tyne which we didn’t want to miss so it was on the train and head north. The concert was great and so was Newcastle, this view down the Tyne looked very familiar, because the Tyne Bridge looks just like a smaller version of the Sydney Harbour Bridge. 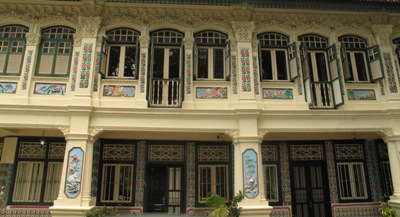 Despite all the breakneck development little enclaves of colonial era architecture survive in Singapore. Like this lovely block of old shop houses with tiled fronts on Jalan Petain, just beyond the Little India district and between Jalan Besar and Serangoon Rd. Back in 1975 we stayed for three months in a hotel on Jalan Besar putting together the first edition of Southeast Asia on a Shoestring, but strangely I don’t remember this little group of buildings.