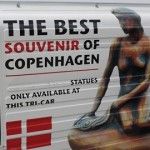 In my May visit to Copenhagen I saw more than just the lineup of wind turbines from my flight in. ◄ An hour later I was standing beside Copenhagen’s iconic image, harbourside figure of the Little Mermaid.           Where y... 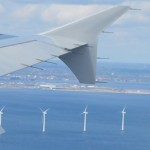 I’ve flown into Copenhagen, Denmark a few times over the years and one thing I always like is the lineup of wind turbines paralleling the coast between the airport and the city. If you come in from the Sweden side, you usually do, there they are, off to your right...

Bike share systems are being rolled out in more and more major cities around the world. ‘White bicycles’ were tried in England in the hippy ‘60s, but they were all soon stolen. Years ago I tried a more modern incarnation in Copenhagen (make them ugly, instantly reco...

En route to the Faroe Islands I stopped off in Copenhagen and caught Doug Lansky’ Signspotting show. Doug has put together two Signspotting books for Lonely Planet, photographs of the weird and wonderful signs you bump into all over the world. In Copenhagen the...