I’ve been posting some ‘end of 2009’ lists in an assortment of categories, starting with Aerial Views, then with Hotels (good and bad), Other Transport, Music, Cars & Drives, Galleries & Museums and Books. Today it’s my Animals & Wildlife of 2009.

There have been some great animal encounters in 2009, with brown bears (the big ones, sometimes known as grizzly bears) topping the list. My LPTV Alaska excursion took me to Kodiak Island where you find the biggest of these big bears. You can read about it on my Kodiak blog or see the bear page I wrote for Lonely Planet.com.

Of course there were lots of other wildlife encounters in Alaska from musk ox to kayaking with sea otter.

▲ A sea otter at Homer enjoying a crab feast, the bird is hoping for scraps

My other LPTV assignment to Laos also featured animal encounters, in this case elephants – lots of them – at the Sainyabuli Elephant Festival. 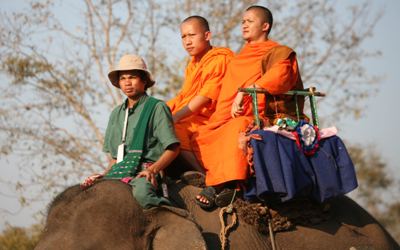 Costa Rica provided an assortment of wildlife sightings including some wonderful hummingbirds, but the funniest one took place at Arco Iris Lodge in Monteverde.  I’d no sooner sat down for breakfast than a troop of white faced capuchins appear noisily in the treetops right outside the upstairs dining room windows. ‘Let us in so we can have breakfast too,’ seemed to be the message. ‘Or at least hand us a few bananas.’

One of the staff reported hearing noise from the dining room and discovered a capuchin had found a window ajar and levered it open enough to get in, where the monkey was helping itself to the bananas. Sprung, it thrust one last banana into its mouth, shoved another banana under each arm and raced for the window, only to discover that with bananas under its arms it couldn’t fit its shoulders through the space. She chased it round and round the kitchen, but ‘it was going to die before it dropped those bananas.’ Eventually she had to open the window wider so it could get out. 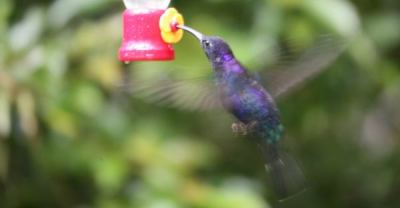 Australia provided lots of wildlife sighting opportunities including seals, koalas and kangaroos on Kangaroo Island off South Australia. Well you’d be disappointed if you didn’t see kangaroos on an island named after them? My stay at Pretty Beach House north of Sydney featured regular visits from a very relaxed resident water dragon. 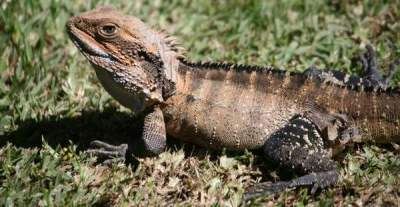 My final Australian wildlife didn’t even require moving from my computer, my study looks out on to a courtyard and a pair of turtle doves took up residence in the courtyard in late November. On December 18 the two eggs in their nest finally hatched out, I was beginning to think they’d never hatch. Now how long before they fly away? We’ve got a kookaburra that hangs around our place as well, they’re enterprising, ruthless hunters, hope they don’t find the turtle dove chicks. 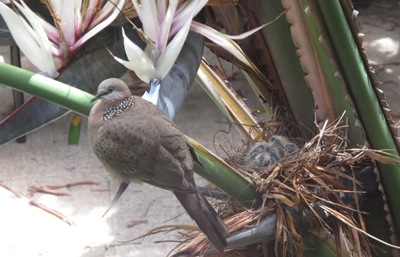