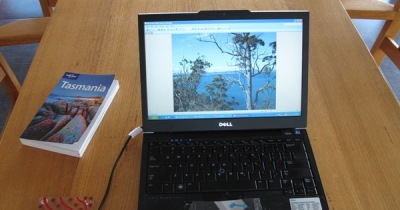 ▲  My laptop on the table at the place we stayed, the view out the window

The year’s travels for Maureen and I kicked off with a trip with some friends to Bruny Island. Go to Hobart, the capital city of Australia’s island state Tasmania. Drive south from Hobart for 32km to Kettering, jump on the ferry and 10 minutes later you’re on Bruny Island. You can’t get much further south in Australia than Cape Bruny, the southern tip of the island, but we stayed just outside Adventure Bay, just south of the sandy isthmus which divides the island into southern and northern halves.

▲  View from the Fluted Cape walk out of Adventure Bay

Bruny played an interesting part in Australia’s early European exploration. The Dutch navigator Abel Tasman turned up in 1642, but his visit just skirted around the southern perimeter of New Holland and he did not land on the island. In 1773 the English captain Tobias Furneaux on HMS Adventure stopped in and named Adventure Bay after his ship. He was sailing with Captain Cook on the Resolution, but they had become separated. They met up again in New Zealand.

Post-mutiny, on his second breadfruit collecting trip, Bligh stopped in again in 1792, this time with two ships, the Providence and the Assistant. Then French explorer Bruni D’Entrecasteaux came by in the same year and gave his name to the channel separating the island from the mainland. With a change from an i to a y he also donated his name to the island itself.

▲  Boat trip along the south-east coast of the island

So the island has had quite a history of early European visitors. Today it’s a popular weekend destination for Tasmanians, but the island has some wild and wonderful scenery, beautiful beaches, great walks, a picturesquely sited lighthouse and boat trips along the rugged south-east coast where we saw seals, dolphins and a variety of seabirds. A good start to the year!