In 1983 New York City’s Hudson River got a ‘Riverkeeper,’ someone to keep an eye on the health of the river. They make sure companies don’t dump stuff into it, builders don’t shove up ugly and inappropriate buildings beside it and that the river is looked after for everybody who uses it. 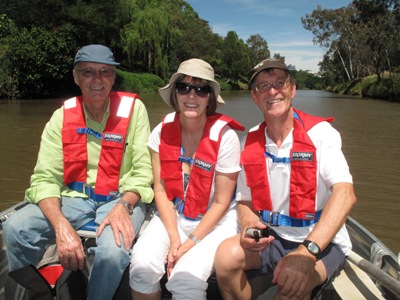 ▲  Me, Maureen and Ian Penrose, the Yarra ‘Riverkeeper”

Having a Riverkeeper was clearly a good idea, there are now 150 of them around the world and just before Christmas Maureen and I had a ride up Melbourne’s Yarra River with Ian Penrose, the Yarra Riverkeeper, and his project officer Rod Ingham. The Yarra has had a Riverkeeper since 2004. 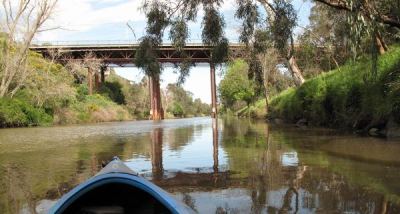 ▲  The view from my kayak on the river.


We live on the river and I sometimes take my kayak out along the river so we clearly have an interest in keeping it in good shape. The Yarra winds for 242km from its source in the Yarra Valley into the city of Melbourne,  eventually flowing right past the city centre, the redeveloped Docklands, the container docks and finally passing under the Westgate Bridge and out into Port Phillip Bay.

Along the way the river caters to all sorts of uses. There’s a terrific bicycle path which follows the river’s course, I did a lot of my training for the 2009 Tour d’Afrique bike ride along Melbourne’s riverside bike paths. I’m not alone when I take my kayak out either, many Olympic rowing medals have been brought home by Yarra rowers. In the city you’ll find restaurants, bars and even the Crown Casino right on the riverbanks. 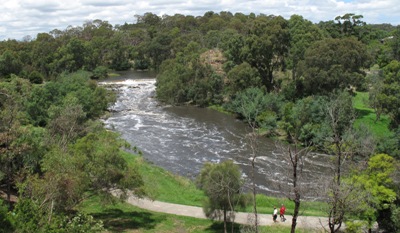 Once upon a time the Yarra was tidal only from its mouth to the city, development has pushed the tidal zone 9km upriver to Dight’s Falls. My home is about midway between Federation Square in the city centre and the falls, that’s as far as I usually take my kayak upriver.

Unhappily the river faces lots of challenges. Demand for water means the river flow is only about 11% of what it would be in natural conditions. Pollution – all those plastic bottles and worse –is a huge problem. Recently there’s been a spate of Big-Mac-style supersized homes plonked down by the river’s edge as it flows through the pricey Toorak suburb.  It’s a good job we have a Riverkeeper, there’s plenty to keep him busy.

◄  an egret on the riverbank, just
below Dight’s Falls.