I visited the country in 2008 and despite the many problems the Caribbean nation faced I had an extraordinarily interesting time there and never felt unsafe.  Even when I had to find a ride back to my hotel in Port-au-Prince on the back of a motorcycle taxi in the early hours of one morning. 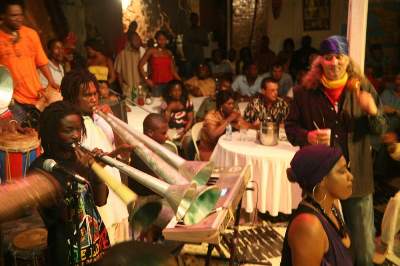 I’d been catching the regular Thursday night racines – ‘roots music’ or voodoo jazz if you prefer – performance of RAM at the Oloffson Hotel. The Oloffson was the model for the Hotel Trianon in Grahame Greene’s novel The Comedians. The hotel survived the earthquake in good shape and Richard A Morse, who runs the hotel and fronts RAM, has been a prolific tweeter on the situation in the city.

My travels around Haiti were made much easier with the expertise of Jacqualine Labrom of Voyages Lumiere. I’ve been in touch with her and she reports:

“we complained about the hurricanes but I would rather have a hundred hurricanes than this. It’s completely  devastating.  We’re still getting aftershocks which are horribly scarey cos even tho they last a nano second one doesn’t know if they’re going to go on longer. I went to bed for the first time last nite but only slept about 4 hours and then my stomach was in knots with these aftershocks so got up and read and rested in a chair. My household staff all slept outside on a spare piece of ground, like thousands of other Haitians – they’re too scared to be inside a house. They’ve never had to my knowledge an earthquake of this magnitude. We’re up to 35 aftershocks now and they reckon it won’t be over till Friday.” 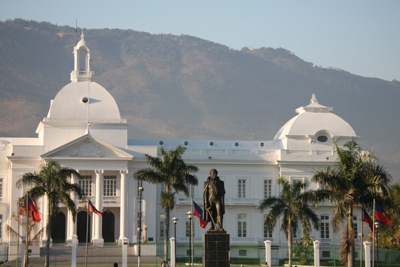 The National Palace before the earthquake, it’s fronted by a statue of Toussaint L’Ouverture, the slave leader who kicked off the rebellion against the French.

If there’s a tiny patch of blue sky in this disaster it came, for me, from French President Nicolas Sarkozy who said ‘we should make sure that it is a chance to get Haiti once and for all out of the curse it seems to have been stuck with for such a long time.’ I hope he’s right.

If you want a black cloud you need go no further than US tele-evangelist Pat Robertson who reckoned it was the Haitians’ own fault for making a pact with the devil. White House spokesman Robert Gibbs (accurately) said there are always people who say ‘really stupid things’ in a crisis.