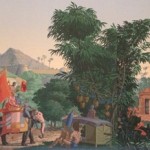 I went down to Tasmania with some friends a few days ago and managed to run into the state’s worst bush fire in years. From our holiday shack on Steele Island, about 50km east of Hobart, we could see the smoke blowing over the ridge to the north. The road to Port Arth...

My January spell at Apollo Bay in Victoria, Australia included a couple of days walking along the Great Ocean Walk and some interesting encounters with Aussie critters. Not this one, this rather fine looking pterodactyl model featured in a dinosaur walk at the Otway F...