I’ve been in Alaska, shooting another program for the forthcoming LPTV/National Geographic series The Roads Less Travelled. The 13 part series follows Lonely Planet writers and photographers ‘on the road’ and launches later this year. I worked on the Laos program in the series earlier in the year. My final Alaskan venture was out to Kodiak Island. 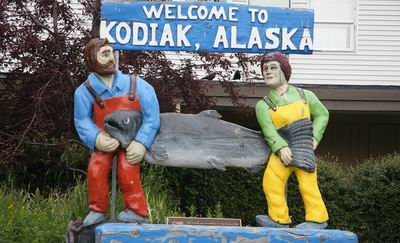 Wow, what else can I say about Kodiak, it’s unbelievably dramatic and beautiful. At this time of year it’s green enough to make an Irishman jealous, but it also features fiords, glacial lakes, rocky mountains, glaciers and salmon streams. The salmon streams are, indirectly, the reason we’ve come to Kodiak. A tasty salmon (or preferably a dozen tasty salmon) is the favourite dish for a Kodiak bear and Kodiak has a lot of bears. The island’s 9000 square km is home to 2500 to 3000 brown bears*. That’s three times as many bears as you’ll find in all the USA outside of Alaska. 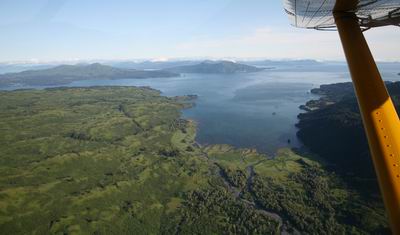 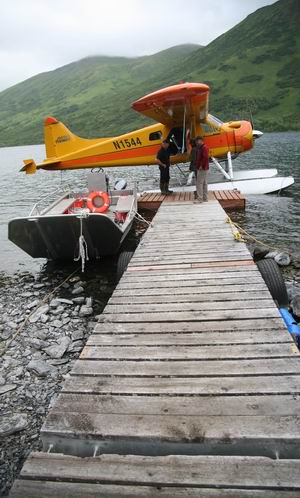 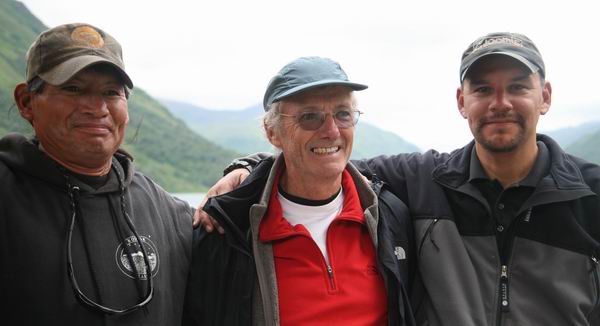 On Camp Island we met up with our expert native Alaskan guide Alex and his sidekick Rome and spent the next three days looking for bears. We certainly found them, bears and bear cubs and lots of bear salmon fishing activity. 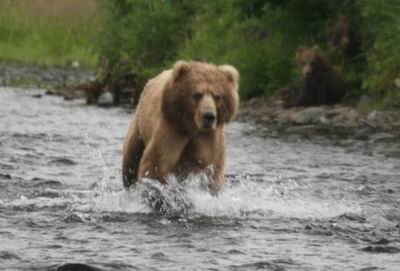 By the end of our spell on the island we’d become remarkably nonchalant about these huge mammals. They may have sharp teeth and enormous claws, but they’re interested in eating fish, not humans. The general process was we’d see the bear, the bear would see us, the bear would study us for awhile, decide we were harmless and get back to looking for fish. 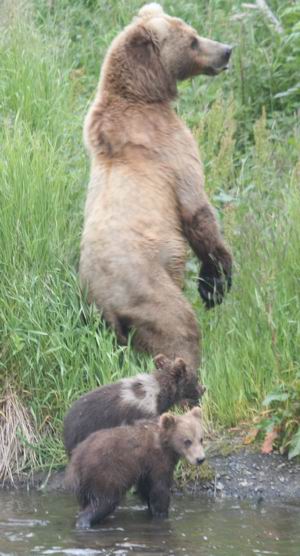 Of course my relaxed attitude towards close contact with earth’s largest carnivores may have been influenced by the presence of our two expert guides. Alex and Rome also toted guns although only as insurance, they’ve never had to use them. At the end of our Kodiak visit we returned to Kodiak town and with a few hours to kill before our Anchorage flight drove out to Fort Abercrombie park, on the edge of the town. Walking back to meet the others at the car I turned a corner and found myself face to face with a bear. And with no expert guide with a gun to look out for me.

I jump back, and then remember the instructions, do not back off, definitely do not turn your back and run. Confront the bear. So I do. But the bear has also jumped back and bears must get the same instructions: ‘don’t run away from humans, face the human, show it you’re not afraid.’

‘Oops,’ the bear must have thought, ‘I’m doing this all wrong.’

So the bear turned round and confronted me too. We study each other for a spell, but essentially the bear wants to get back to the patch of vegetation it was quietly munching on until I disturbed it. Which is exactly what it does. 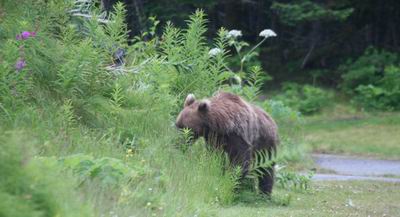 ▲ Bear heads back into the vegetation