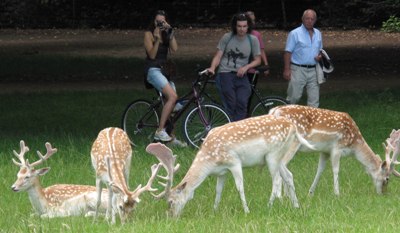 ▲ There’s plenty to catch your eye cycling around London. Like many London cyclists a spin round Richmond Park makes a pleasant little training run, for me it’s 10km there, 10km for each lap, 10km back. Richmond Park will feature in the Olympic Cycling Road Race event in 2012. Presumably they’ll ensure the park’s famous deer are kept off the road on that day, cars and cyclists often have to stop for them.

▲ King Henry’s Mound at the north-west corner of the park looks across to Heathrow and Windsor Castle in one direction. There’s a telescope set up to check the view in the other direction, through a narrow gap in the trees you can see clear across London to a neatly framed view of St Paul’s Cathedral over 16km away. It’s remarkably like the Knights of Malta keyhole view of St Peter’s Basilica in Rome.

▲ London’s pigeons – rats on wings – are unwelcome in many places, you’ll see many architectural elements with spikes attached to dissuade them from roosting there. Spiking tree branches, however, seems hardly fair. Riding through Kensington I spotted this tree where clearly somebody had taken exception to pigeons defecating on their car parked below. 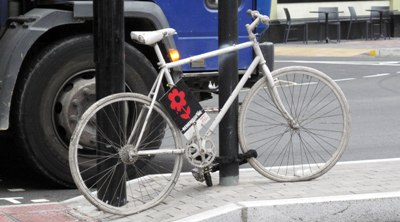 ▲ At the junction of Old St-Clerkenwell Rd and Goswell Rd, not a stone’s throw from the Lonely Planet office near ‘Silicon Roundabout,’ London’s unofficial high tech centre, this white bicycle is chained to the traffic lights in the middle of the road. A sad reminder of a cyclist’s demise.