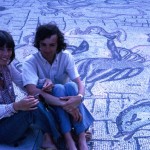 Lido di Ostia is the beach resort for Rome, it’s nothing special but convenient if you’re flying out of Rome Fiumicino, the main Rome airport. I had an early morning flight so I decided to stay there and have a look at Ostia Antica, it was the port for ancient Rome, b...

I don’t just read travel books – although three recent novels also travelled through their pages. I really liked Jennifer Egan’s A Visit from the Goon Squad which won the Pulitzer Prize for Fiction in 2011. Following the inter-connected lives of rock mogul Bennie Sala...

I’ve driven up (or down) the Croatian coast several times over the years, the first time right back in the Yugoslavia era. This time I joined a bunch of friends to make the trip by boat. A series of often overlapping islands sprinkle the length of the coast, spectacul...

▲ There’s plenty to catch your eye cycling around London. Like many London cyclists a spin round Richmond Park makes a pleasant little training run, for me it’s 10km there, 10km for each lap, 10km back. Richmond Park will feature in the Olympic Cycling Road Race eve...