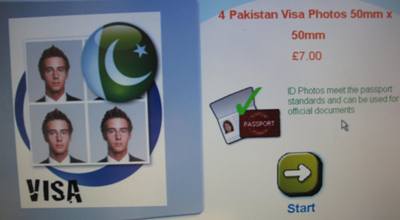 I dropped into my local Boots (a major British pharmacy chain) the other day to get some portrait photographs for visa applications. For an extra £2 the machine would dispense not just ordinary old photographs you could use anywhere, but photographs which were specifically suitable for applying for a Pakistan visa! For the same price (£7 rather than the standard £5) it would also take photos suitable for an Indian visa. In fact I suspect the two are absolutely the same, but you could hardly apply for a Pakistan visa with photos that were OK for India, could you? Or vice versa.

Correction, requested the form, list every country you have visited in the last 10 years in less than 100 characters. Including spaces. So I started alpahabetically and got half way through the B’s, that was good enough: