At the Olympic Opening 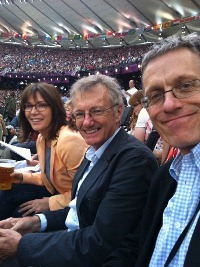 ◄ Maureen and I were at the Olympic opening in London on Friday night. Here we are with Simon Calder, travel editor at the Independent newspaper.

The opening – fantastic – a wonderful, exciting, dramatic evening full of high spots. We all loved the Queen ‘parachuting’ in with James Bond.

As a once-upon-a-time engineer I was delighted to see the top-hatted Brunels appear, led by Isambard Kingdom Brunel himself, the great Victorian engineer (played by Kenneth Branagh), quoting from Shakespeare’s Tempest. ▼ 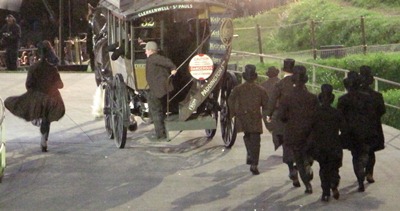 When we all took part in bringing a blue wave down to convert the stadium into the sea – and then some synchronized LED light waving – it was remarkably like a mass games in Pyongyang, North Korea (I’ve been to two of those). Except there were no killer dictators involved and we hadn’t rehearsed. ▼ 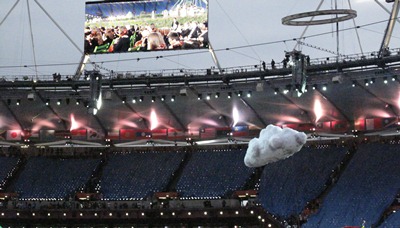 Then the National Health Service danced on stage with their trampoline beds. I presume at this point Mitt Romney, who was in the stadium, was squirming since for his Tea Party backers having a health service is socialism at its very worse. Romney had arrived in London and illustrated his political ineptitude by bad-mouthing Britain’s Olympic preparations. Well he should know, he’d saved the Salt Lake City Winter Olympics from meltdown. Prompting Prime Minister David Cameron to quip that ‘we are holding an Olympic Games in one of the busiest, most active, bustling cities anywhere in the world. Of course it’s easier if you hold an Olympic Games in the middle of nowhere.’ ▼

And then there were those angelic cyclists! Magic. ▼

PS – I was at the Sydney Olympic opening in Australia in 2000 as well. That was also terrific! One thing was very similar for both openings, it was remarkably easy to get to and from the event by public transport..