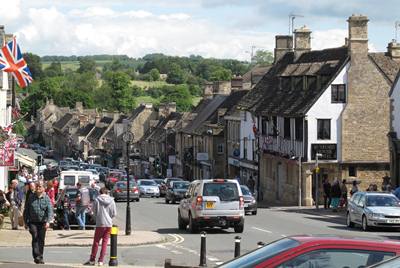 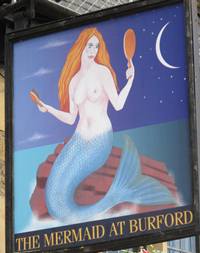 ◄ North-west of London and just beyond Oxford the town of Burford is regularly cited as one of the prettiest in England. Of course it’s well equipped with pubs, like any pretty English village or town, although it’s unclear why there should be a mermaid pub so far from the sea.

The Church of St John the Baptist is the usual mishmash of styles, parts of it date back to the late 1100s. It’s particularly interesting for its huge variety of monuments, memorials, engravings, tombs, fonts, inscriptions, stained glass windows and other items. The Epona Stone might be the earliest artefact in the church, possibly dating from 160 AD. ▼ 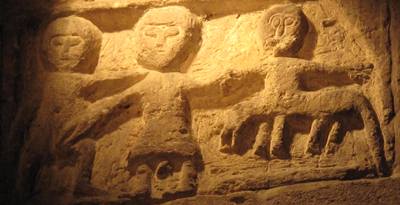 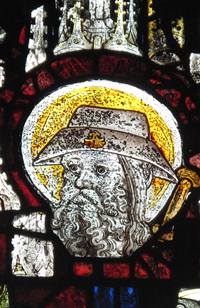 The stained glass includes this head of St James of Compostela with the cockle-shell on his hat that has become the symbol of the popular Way of St James or Camino Santiago walk in Spain. So he should really be the patron saint of walkers and trekkers.►

The tomb of Sir Lawrence and Lady Tanfield is interesting because she was convinced he should never have ended up here, if only people had realised just how important he really was, he (and presumably she?) would have ended up in Westminster Abbey, instead of this country backwater. She certainly announces that on the monument’s inscription. 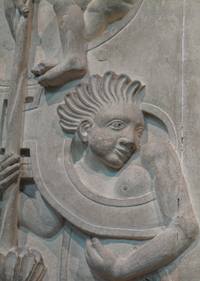 The church’s old clock, recently restored, dates from 1685 and the mechanism is on display.

◄ The monument to Edward Harman, barber/surgeon to King Henry VIII, features these Brazilian Indians. It’s surmised that it may indicate that he invested in trade with South America.