Last year I blogged about my travels around the Congo (the big, bad Congo DRC although I also hopped across the border – the Congo River – to Congo Brazzaville). Plus I read the best book to read about the Belgian colonial horror story – King Leopold’s Ghost.

On my way back to Australia – via Hong Kong and Cambodia – I stopped for a few days in Belgium in search of the notorious King Leopold II. The best place to go Leopold hunting is his Africa Museum, 14km out of the centre of Brussels, on the city edge at Tervuren.

A colonial figure in the Africa Museum café. ► 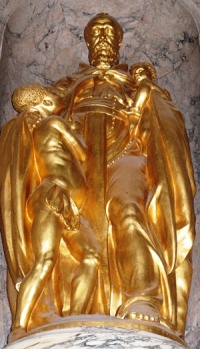 ◄ The museum is in a magnificent old building, but very dark and gloomy inside and most of the exhibits are very dated. It’s closing down in 2013 for a substantial rebuild.  Presumably this will include a major reassessment of the Belgian colonial experience as well. A baby step has been taken in that direction, but the golden statue of Leopold II ‘bringing civilisation to the Congo’ in the entrance rotunda sums up the original emphasis of the museum Other statues also illustrate the Belgians as wonderful colonists.

Joseph Conrad, before he went on to write Heart of Darkness, the first of many classic Congo novels, described Leopold’s Congo activities as ‘the vilest scramble for loot that ever disfigured the history of human conscience.’ 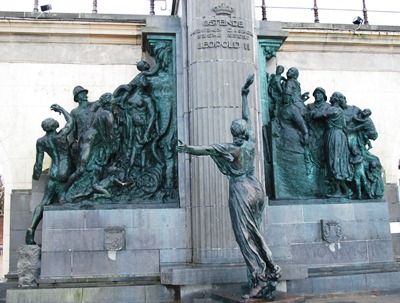 ▲ The seaside resort of Ostend was a prime destination for the king’s vile loot. Part of Ostend’s attraction was that it was far enough away from Brussels to keep the king’s extensive collection of mistresses out of the queen’s sight, but he lavished his Congo wealth on Ostend architecture as well as Ostend sexual escapades. Sadly WW I and WW II both inflicted huge damage on the town and today there are only occasional architectural gems between the featureless modern apartment blocks. His nearly half km long Belle-Epoque style Sea Promenade with its endless row of Tuscan columns has survived and it kicks off with another heroic equestrian statue of the royal villain. On each side of the royal horseman a throng of his European and African subjects gaze up at him adoringly. Presumably Belgian civilisation has not yet had much of an impact on the Africans, who are appropriately naked.

◄ An African gentleman’s left hand has been chopped off, perhaps a more recent comment on Leopold’s colonising techniques. Leopold’s private Congo army, the Force Publique, routinely chopped off hands to prove they hadn’t wasted bullets when they were busy inflicting their brand of terror on the local inhabitants.