A weird relationship isn’t it? Underlined yet again by the Sandy Hook Elementary School massacre in Connecticut. The USA gun illustration is on the wall at the front of the ex-US Embassy in Tehran, Iran. 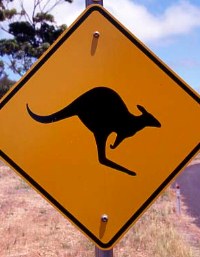 Now Australians also have a love affair with guns, any Australian outback sign, particularly those iconic kangaroo ones, is likely to be riddled with bullet holes. But if the US had the same number of deaths-by-gun per 100,000 people as Australia (1.05 instead of 9) the number of deaths per year would fall from 30,000 to 3,000. Get the death rate down to the UK level (0.25 per 100,000) and the number would fall to less than 1,000.

In all three countries more people die from suicide-by-gun than homicide-by-gun – a 2:1 ratio in the US, 4:1 in the UK and 8:1, way more, in Australia. But it’s the same story, the more guns around, the more people get killed by them.

I’ve been working on a new book which should be published in August next year. It covers Colombia, Congo DRC, Haiti, Israel & Palestine, Nauru, Pakistan, Papua New Guinea and Zimbabwe and the tentative title is Travels in Fairy Lands because, it seems to me, each one of those countries has a fairy tale attached to it. If it was the USA and the gun lobby it would be the Hans Christian Andersen fairy tale The Emperor’s New Clothes. The National Rifle Association has no clothes and one day somebody is going to point out that the USA will not collapse, the Russians (or choose a more recent enemy, Al Qaeda perhaps) will not invade and the sky will not fall in if the USA was more sensible about guns.

PS – I’ve lived seven or eight years of my life in the USA. I’ve lived on the west coast (San Francisco Bay Area), east coast (Baltimore) and mid-west (Detroit, back it the Motor City glory days). I’ve also driven across coast-to-coast in both directions. I’ve visited 41 of the 50 states.