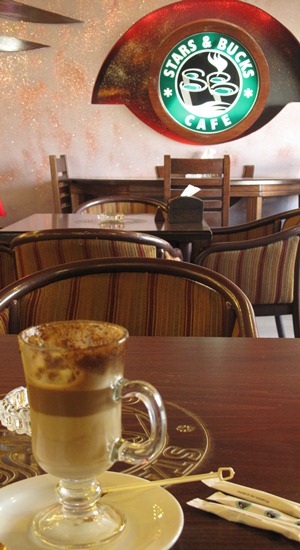 ◄ Palestine is one of those unusual countries without a McDonalds and when the big brands aren’t present you can be pretty certain some strange replacements will pop up. Like Ramallah’s Stars & Bucks coffee shop, right in the centre of Palestine’s de facto capital city. There’s something strangely familiar about the logo, the typeface and the name, but it just isn’t right.

Coincidentally Melbourne in Australia, where I live for much of the year, is one of the few places in the world where Starbucks haven’t succeeded. Melbourne had 20-odd Starbucks outlets, but Melbournians are extremely proud of their coffee culture and there was almost a feeling of exultation when most of them had to close down in 2008. Today Melbourne has five Starbucks, which is still five more than Palestine.

▼ I’ve encountered strange brands elsewhere on my travels this year, like this KFC in Lubumbashi the capital of Katanga Province in Congo DRC.