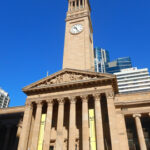 My travels north from Melbourne took me through Brisbane three times. ▲ The first time as we descended into Brisbane there were wonderfully clear views of Surfers Paradise and the Gold Coast off to the east. I’d fortuitously chosen the appropriate side of the plane... 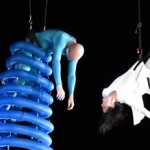 Brisbane – Bicycles & Do Do Land

◄  Seems like everywhere I go these days has recently signed up to a bicycle rental scheme. I’ve posted about my encounters with them in London, Paris, Melbourne, New York, San Francisco and now Brisbane. Back in September I was in Brisbane for the Brisbane Writers Fe...

I’ve just travelled up through the Solomon Islands and across to the troubled Papua New Guinea island of Bougainville. You can find various discussions on travelling this route in Thorn Tree. ◄ I started by flying from Brisbane in Australia to Honiara in the Solomo...

I’ve had three tight transfers in recent months, two successfully, one a total failure. ▲ Coming in to Singapore over the Rhiau Islands • Singapore Changi Airport – inbound from Phuket on Silk Air, out to Melbourne on Singapore Airlines with a crazy tight 50 m...