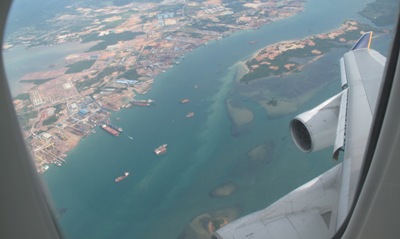 ▲ Coming in to Singapore over the Rhiau Islands

• Singapore Changi Airport – inbound from Phuket on Silk Air, out to Melbourne on Singapore Airlines with a crazy tight 50 minute transfer. And the Silk Air flight was late. Singapore Airlines were like a dream, grabbed Maureen and me (and four other passengers), whisked us from one terminal to the inter-terminal Skytrain line on a buggy, grabbed us off the Skytrain and ran us to the waiting plane. Perfect. 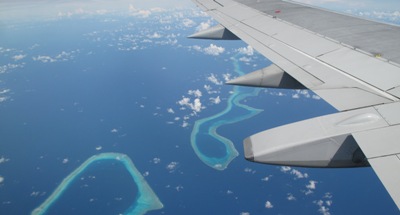 ▲ flying over the beautiful Indispensable Reef coming back from the Solomons

• Brisbane – inbound from Melbourne on Qantas, out to Honiara in the Solomon Islands on Solomon Airways, a tight 1 hour 15 minute transfer and Brisbane’s domestic and international terminals are a bus ride apart. There was no earlier flight from Melbourne that morning and I couldn’t fly up to Brisbane the previous day. But the Qantas flight left on time and arrived more than on time, I took a taxi for the couple of km between the terminals and made it with time to spare. On the other hand my previous Qantas domestic flight, a less-than-an-hour trip from Melbourne to Canberra, eventually arrived 3 hours late! But this time, perfect.

.
• Madrid – inbound from London Heathrow on Iberia, out to Santiago de Chile on LAN Chile, with a 1 hour 45 minute transfer. The Iberia flight left late, got later, took an interminable time to get from runway to gate in Madrid and at that point Iberia fell flat on its face. There were a bunch of passengers transferring to close-to-midnight flights to South America. So did Iberia rush us off the plane and rush us to the flights? No, they told us to sit and wait while they deplaned everybody else, then in an equally leisurely fashion bussed us over to the other terminal where there was nobody to help and absolutely no information about which gates our flights were departing from. When I (and other Santiago-bound passengers) eventually asked an information desk we were directed to the wrong gate. So I missed my Santiago flight. Thank you Iberia. 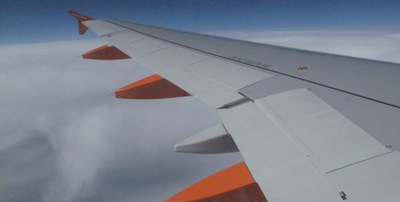 ▲ easyJet taking me back to London

And since I’d have to wait 24 hours in Madrid for the next flight and would have missed the events I was flying to Santiago for I dumped the whole trip (including two weeks in South America), flew back to London with easyJet and I’m on my way to Zimbabwe in Africa instead.