My travels north from Melbourne took me through Brisbane three times. 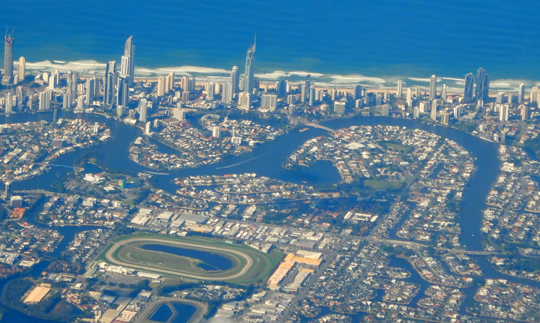 ▲ The first time as we descended into Brisbane there were wonderfully clear views of Surfers Paradise and the Gold Coast off to the east. I’d fortuitously chosen the appropriate side of the plane to sit on to enjoy the view.

I was only in Brisbane for an afternoon-evening and then the next morning before heading off to Longreach on the Spirit of the Outback train. Maureen and I came through Brisbane in early 1974 – you can see me on our motorcycle in this recent posting. Over the years Brisbane has had three great floods during its European times. There have been other big, but not quite so big, floods but the major floods were in 1893, 1974 and 2011. In 1974 we came through just after that year’s major floods. Today I’ve just read an article by Matthew Condon – The Flood – in the Queensland literary magazine Griffith Review about growing up in Rosalie and then living through the 1974 flood.

Rosalie today is a very different place to where Matthew Condon grew up so my first Brisbane excursion was to head to those once flooded streets to see how they look today. Yes gentrification has certainly happened, yes all the trendy restaurants, bars, cafes and shops have recovered from 2011 and yes they wouldn’t have been there in 1974. But, yes it could all happen again. 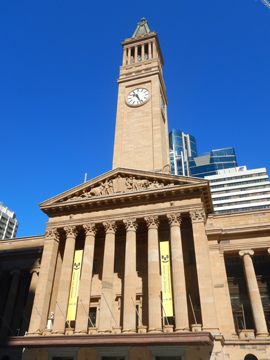 The next morning I did a little exploring of central Brisbane, including two free Brisbane City Hall tours. This is the most magnificent city hall in Australia and indeed it is a ‘city’ hall. Melbourne and Sydney merely have ‘town’ halls. I did a tour up the clock tower, at one time the highest building in the city, and then a longer tour of the whole building.

I also did a stroll up Ann St, which is certainly the ‘church’ street of Brisbane. 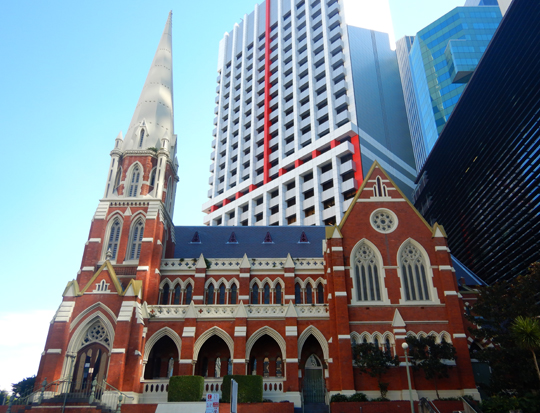 ▲ First I passed the Albert St Uniting Church, picturesquely sited right across King George Square from the City Hall. You can look down on it from the City Hall clocktower. With a reputation as Brisbane’s prettiest church it’s long been popular for marriages, particularly during WW II when many American servicemen, stationed in Brisbane during the war, were married here. From 1942 to 1944 General Douglas MacArthur was based in Brisbane. 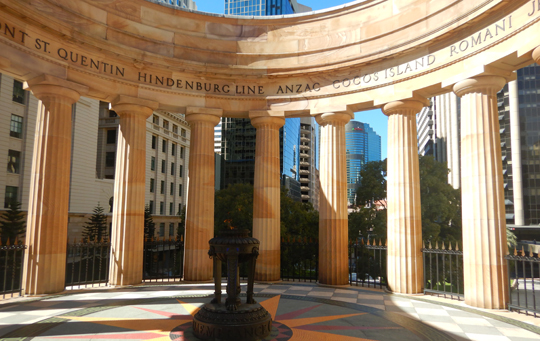 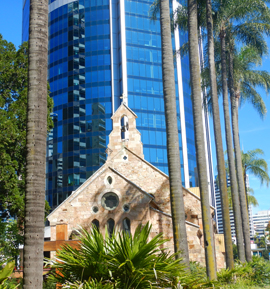 ▲ Then there’s the Shrine of Remembrance war memorial on Anzac Square, right across from the Central Station for trains. Next, continuing up Ann St, is St Andrew’s Uniting Church before you come to …

◄ All Saint’s Church, looking very tropical, and finally St John’s Cathedral. After which it was time for me to head to Roma Street Station and board the Spirit of the Outback train to Longreach.

▲ A few days later – after my train trip, visit to Longreach, drive out to Winton and visit to the Lark Quarry dinosaur stampede site I was back in Brisbane and dining with friend Jeff and Rosemary Niehus. Their home featured magnificent views of central Brisbane including the collection of illuminated cranes working on the Queen’s Wharf riverside project. Brisbane is certainly a city on the move, it feels much brighter and more active than Adelaide or Perth. The next morning I was heading out to Moreton island.