I’ve just travelled up through the Solomon Islands and across to the troubled Papua New Guinea island of Bougainville. You can find various discussions on travelling this route in Thorn Tree. 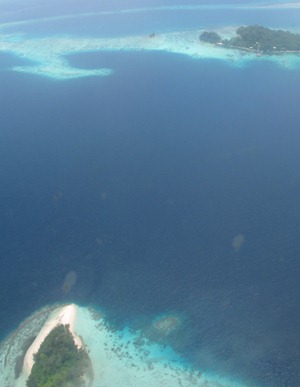 ◄ I started by flying from Brisbane in Australia to Honiara in the Solomons and then up to Ghizo. As we descended to Ghizo you could see Kennedy Island (bottom left) and Fatboys resort on Mbabanga Island (top right).

Kennedy Island was where future US president JFK swam to after PT-109 was sunk following a collision with a Japanese destroyer during WW II. Last year I paddled a kayak out to the island from Fatboys.

▲ From Ghizo I took the weekly (Thursdays) Solomon Island Airlines flight up to Balalae, the airport island for Shortland. Balalae had a tragic WW II history, I’ll post on that soon. 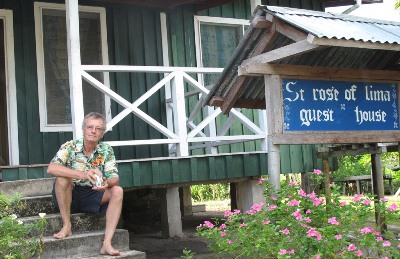 ▲ A local boat took me across to Nila Mission on Shortland Island, the mission guest house is the only place to stay. If you’re travelling this route in either direction bring some supplies with you, the guest house has a kitchen you can use, but there isn’t much on sale in the trade stores. Dinner-breakfast-lunch-dinner while I was there was minute noodles every time. 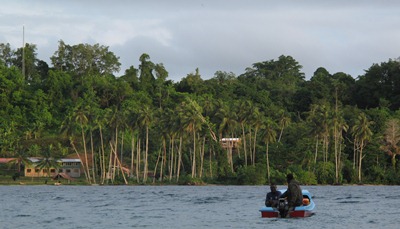 ▲ Departing Shortland – Saturday is market day at Buin, just inland from Kangu, the south coast arrival point on Bougainville Island. There are usually a few boats going across, I paid S$140, about US$25, for the trip.

▲ A storm off to the east – it’s only 32km from Shortland to Bougainville and there’s land in sight all the way. A couple of weeks earlier the local paper had a story on a boat going adrift on this route (although actually heading further south to Ghizo) after running out of fuel. They drifted for 6 days before a Taiwanese fishing boat spotted them.

▲ Landing at Kangu Beach. From there it’s only about 10km to Buin. Two problems to be aware of travelling this route:

• It’s not an official exit point from the Solomons or arrival point to Papua New Guinea. I got my passport stamped out of the Solomons at the immigration office in Ghizo. ▼ 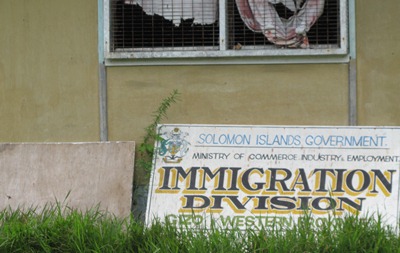 • Then I reported to the police station in Buin and they were very friendly and stamped my passport although I still have to go to an immigration office (when I get to one) and officially arrive in PNG. I did have a PNG visa, without a visa I’d have been heading straight back to Shortland.

• Bring plenty of PNG currency – the kina – with you. There is nowhere to change money easily until you get all the way to Buka which has ATM machines. In fact bring plenty of money and some more as well. PNG is very expensive (you look at a room and think US$20 only to hear US$120). Plus if you want to do things like see Admiral Yamamoto’s crashed Betty bomber or visit the Panguna mine site – postings coming soon on those two – it can cost big money.

Finally arriving in Bougainville from Shortland gives you considerable street cred! There are close links between the Solomon Islanders and the Bougainvilleans and they’re delighted to hear you’ve arrived on their island by this back door route.