More Locked Down in Melbourne – and my virus test


Well I’ve posted about where I haven’t been going, about my empty city of Melbourne and where I have been travelling recently – walking and cycling along Melbourne’s Yarra River. 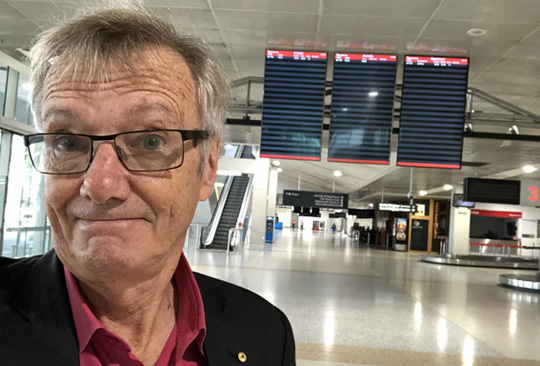 ▲ And visiting Melbourne’s Tullamarine Airport. It was a rare opportunity to see a deserted airport and empty departure and arrival boards. I’ve endured some joking for this photograph, one friend labelled it ‘A Man Unmoored.’ I’d gone through security into airside in the Qantas domestic terminal and when I came back by security an hour or so later I don’t think anyone else had come through. There was certainly no queue for the X-Ray machines.

▲ The International Departures board certainly underlined the story – there’s nothing flying out this afternoon. Still there was one bright side, like many airports Tullamarine usually makes lots of money from sky-high car parking charges. Not at the moment, you can park for free.

▲ Riding my bicycle into the centre of Melbourne, along the bicycle track by the freeway, I came to this sign telling me I should turn around and ‘Go Home.’ 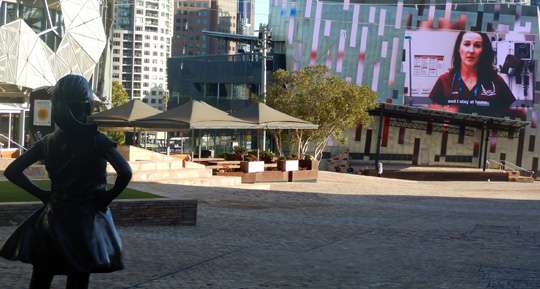 ▲ That message was underlined in Melbourne’s Federation Square with videos of medical workers telling their stories, ending with the admonition that we should ‘Go Home.’ In fact in the state of Victoria as of today there are 3 people on ventilators, 3 people in intensive care and 9 other people in hospital with Covid-19. That’s 15 people in a state with 6.5 million people, 5 million of them in Melbourne. Our doctors, nurses and other medical workers are doing a great job, but the hospital system is clearly not being overwhelmed. Of the 19 deaths in Victoria since the virus first hit Australia, one of them was under 60 years of age, three more in their 60s, the other 15 deaths were in their 70s, 80s and 90s. In the whole country only three people under the age of 60 have died of Covid-19.

I have been tested – ‘this is going to be uncomfortable’ I was warned, but I was still amazed how far they can shove a stick up your nose. The result: 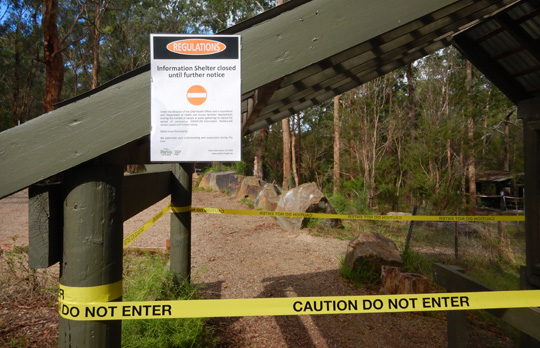 ▲ Don’t look at this information board. Of course there are various lockdown elements which can be annoying – and for many people, out of work, worrying about money, their lives totally disrupted, this is a terrible and ongoing disaster – but for me one minor annoyance has been Parks Victoria. Stringing ‘Do Not Enter’ tape around an information board is their idea of doing something useful. If there had been half a dozen people all day wanting to read the information at Jumping Creek Reserve that would have been a big number. Parks Victoria did not need to waste metres of plastic tape trying to persuade me I shouldn’t read the sign. We’re admonished hourly to wash our hands and Parks Victoria has an answer to that as well: lock up all the toilets, turn off all the taps. I’m bewildered how somebody at Parks Victoria decided that stopping you from washing your hands was a good idea when another branch of the government was endlessly repeating: ‘wash your hands.’

Meanwhile I spend some time every day studying the numbers and the graphs and hoping to see some way out of this. Everywhere in Europe the infection rate figures are going down, the UK – bravely led by Boris Johnson and his wandering adviser Dominic Cummings – bringing up the rear. I like the Italian figures, steadily marching downwards like something perfectly engineered. Downwards is what we want.

On the other hand the figures pretty much everywhere I look in South America are steadily marching upwards, ie in the wrong direction. If Europe is leading the way – and hats off to Greece, once again, for showing how to do it – then the UK is a month behind the leaders, which means South America is another month or two behind the UK. I also look at the Middle East Gulf States, all with unhappy figures which, I presume, are driven by their overcrowded migrant worker hostels and dormitories? It’s the same unhappy story in Singapore which is still struggling to get things under control, although the death rate is commendably low.

Then I look at Africa. Now there are lots of places in Africa where numbers would be impossible to track down and others where you simply do not believe the numbers reported. Tanzania could top that list, they’ve simply stopped reporting anything, denied that anything is happening and insist that the power of prayer is sorting things out. On the other hand the figures out of South Africa are remarkably clearly presented and comprehensive. The end story? Well all of Africa, as of today, is reporting 113,851 cases. That’s not one third the number of cases in New York State, a bit less than New Jersey, a bit more than Illinois. For the whole continent of Africa! I keep my fingers crossed and if the story is true, then well done Africa. No wonder I’ve always enjoyed travelling there.