Of course international travel has completely shut down and in Australia even domestic travel doesn’t extend very far. We really can’t travel interstate at the moment. So I’ve been walking and cycling along the Yarra River, the river which runs, from source to sea, for 242km (150 miles) into and through Melbourne, passing right by where I live and emerging into the sea – Port Phillip Bay – at Williamstown. If you wanted to follow the river from the sea you can start out right by the water’s edge in Williamstown and follow the river to the towering Westgate Bridge, but then everything fades out, you can skirt around Docklands on the north side of the river or follow Lorimer St, not somewhere you’d want to walk, on the south side. Then around the Melbourne Convention Centre (Jeff’s Shed), the fine old Polly Woodside (Belfast-built, three-masted, iron-hulled barque) , Crown Casino and Southbank, you find yourself right on the riverside and for quite a distance upstream it’s a fine river walk or ride. 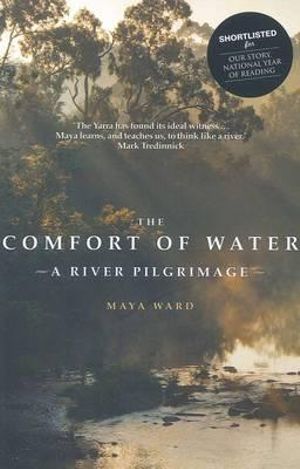 The Main Yarra Trail’s 38km varies very widely, at times it’s a wide, well kept walking and bicycle trail right beside the river. At times it wanders away from the river although it may be possible to find smaller trails closer to the riverside. In places there are choices on both sides of the river, a better trail on one side, something much less ’managed’ (and often much less crowded) on the other.

◄ I’ve got several Yarra River books on my shelves, the most recent addition is Maya Ward’s The Comfort of Water – A River Pilgrimage. With a shifting cast of friends she makes a 21-day pilgrimage from sea to source, wherever that might be, it’s often an open question! Pilgrimage needs to be underlined, it’s very poetic, surprisingly readable and definitely not a guidebook to her 2003 walk, which didn’t stop me from consulting it regularly 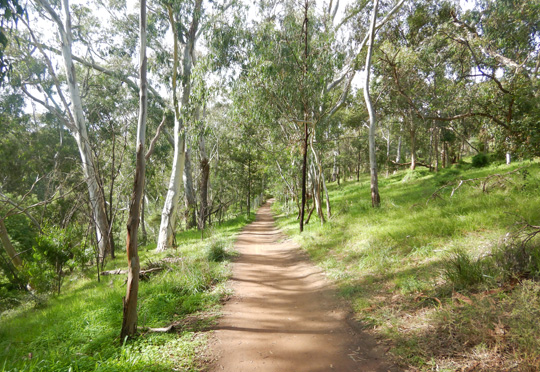 ▲ Upstream from the Fairfield Boat House, between the Chandler Highway and Bourke Rd, this very pleasant and quieter track followed closer to the river while the Main Yarra Trail ran close to the freeway. Willsmere Park and the Kew Billabong on this stretch of the river has recently been developed and is another good reminder of the ‘old’ Yarra River with its flatlands, swamps and billabongs, before it was managed, constrained, channeled and put into its place. 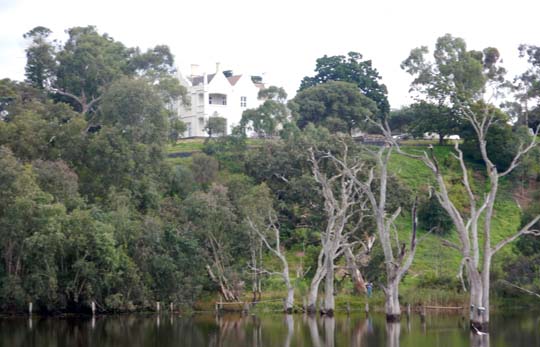 ▲ Banyule Flats – bordered by Viewbank and Heidelberg and the Heide Museum of Modern Art – is another of the places where in its pre-colonial form the river would have writhed back and forth from season to season in a swampy wetlands. Now there’s a big pond and a ‘sometimes’ (if they flood it) billabong, but the flats are still looked over by the 1846 Banyule Homestead. Now there’s an old house which would have seen things over the years? It was another colonial construction built at a time well outside the Melbourne settlement and a symbol of the European encroachment into traditional Aboriginal land. 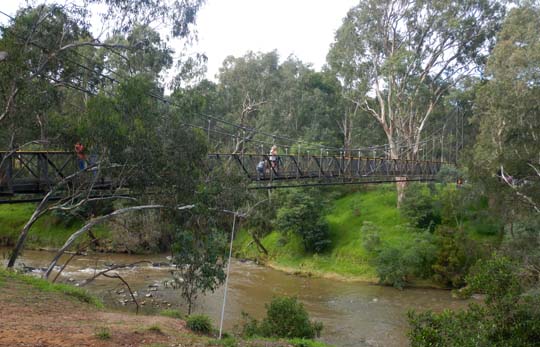 ▲ There are some fine footbridges across the Yarra, like the Ruffey Trail Bridge from the Main Yarra Trail on the north side of the river to Finns Reserve on the south side. That’s between Banyule Flats and Westerfolds Park, where the cycling and walking track runs close to the river and for stretches there are smaller trails even closer to the riverbank. 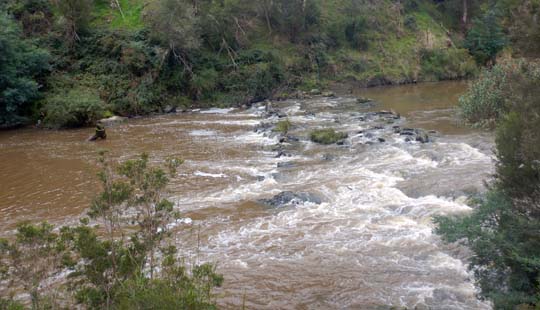 ▲ The river flows swiftly past Westerfolds Park in Templestowe where the Main Yarra Trail cycling and walking track runs right alongside the river for quite a long stretch. In its lower reaches the Yarra moves so slowly – except after steady rain – that it can be a surprise to encounter these stretches of Yarra rapids further upriver.

Beyond Westerfolds Park the Main Yarra Trail continues to follow closely beside the river, past Petty’s Orchard, an apple orchard which dates right back to the colonial era and is the sole survivor from what was once a string of riverside orchards. They still grow some rare apple types here and the orchard is open to the public. Rock star Tom Petty paid a visit to the orchard when he was touring Australia in 1986. Just beyond Petty’s Orchard the Main Yarra Trail turns away from the river where Mullum Mullum Creek joins the river. That’s the end of the trail, but although there’s no continuous route beyond this point there are lots of disconnected riverside trails. 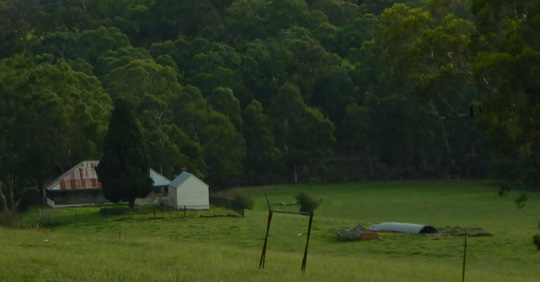 ▲ Pontville Homestead, Templestowe – A damaged footbridge – Parks Victoria are notoriously slow at repairing this sort of thing – crosses the creek to the abandoned Pontville Homestead. It’s an intriguing old house which I intend to investigate further. A sign beside the Main Yarra Trail suggests that Major Charles Newman, who built the place in 1846, had bad relations with the local Aboriginal tribes, probably as a result of seizing their land I muse? Major Newman was not a very nice character on all sorts of levels. He came to Australia, to Pontville in Tasmania at first, after a long spell with the East India Company and the house was designed like an Indian bungalow, a style which pops up elsewhere in Australia, but not very often in Victoria. Apart from friction with the Aboriginals he also appeared regularly in court, it seems his servants had a tendency to abscond because he treated them so badly and he then got upset because the courts didn’t punish them adequately. On one occasion he was threatened with contempt of court because he complained so bitterly.

Plus he tried to write his son out of his will if he married a woman he disapproved of. The son did anyway and the rest of the family, it appeared, didn’t give a stuff so the threat didn’t materialise. Eventually he moved back into Melbourne and in 1852 built a house at 14 Lennox St, Hawthorn, only a stone’s throw from where I live in Melbourne. Once you’ve found yourself beside the homestead on the other side of Mullum Mullum Creek you can follow trails close to the Yarra River for some distance further upstream to where Target Rd follows a collection of powerline towers down towards the river. 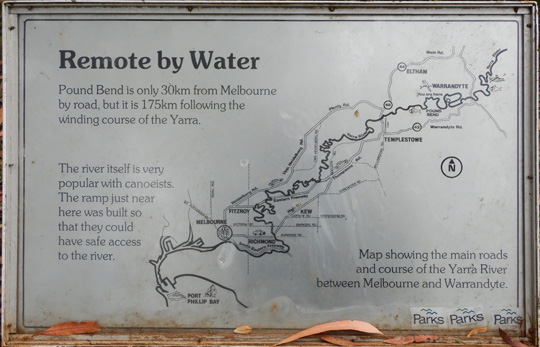 ▲ Beyond this point there’s no way – that I can easily see at least – of following the riverside for some km until you get to Warrandyte State Park. This sign at the Pound Bend downstream end of the park points out how much the river winds. I was definitely astonished to discover how far I was from the river mouth, if you followed every twist and bend of the river. In fact I really don’t believe this sign, certainly I was more than 30km as-the-crow-flies up the river, but 175km? That would mean I was 70% of the way from sea to source? Surely not! 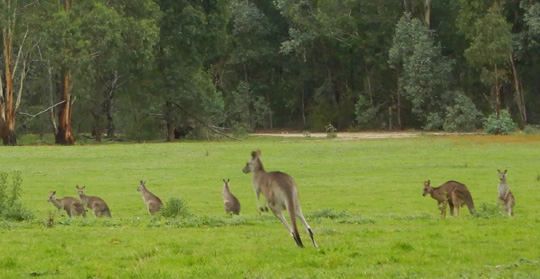 ▲ I encountered a mob of Eastern Grey kangaroos on the walk through Warrandyte State Park, there had been lots around the Pontville Homestead as well. The trail here goes around a loop of the river which was cut off by the 145-metre-long Pound Bend Tunnel in 1870. Gold miners wanted to look for gold in the riverbed and diverting the river through this tunnel dried up the river for almost four km. There was never enough gold discovered to cover the cost of the tunnel and today some water goes through the tunnel, but most goes the long way around by the river. I walked the park circuit and as well as the kangaroos there was lots of birdlife although not a koala, even though there are said to be some in the park. Nor did I see – or hear – the fierce and thieving kookaburras a park sign warned about.

From the Taroona Reserve, just upstream from the top end of Pound Bend Tunnel and Warrandyte State Park, I unfolded my Brompton bicycle and pedaled along the very well kept trail along the river to Warrandyte. The first stretch was very popular, running on the riverside below the main road – Yarra St – in Warrandyte. Lots of people walking, lots of children, lots of dogs, but surprisingly no other cyclists at all. At the far end of Warrandyte I continued into Black Flat and  followed a narrow riverside path into Jumping Creek Reserve, eventually reaching the Jumping Creek Canoe Launching Area where Parks Victoria had been out big time with the ‘no entry – keep out’ tape trying to persuade people they shouldn’t sit at the picnic tables or look at the information boards while the coronavirus crisis is going on. This was all very redundant since there was almost nobody there.

This was not a good trail for bicycles and it was certainly up and down for walkers as well, there were lots of steps, little bridges over creek inlets, the odd tree fallen over the track. There was almost nobody else on the trail, from leaving Warrandyte, through Black Flat and on to Jumping Creek I only met two women and then one heavily tattooed guy. 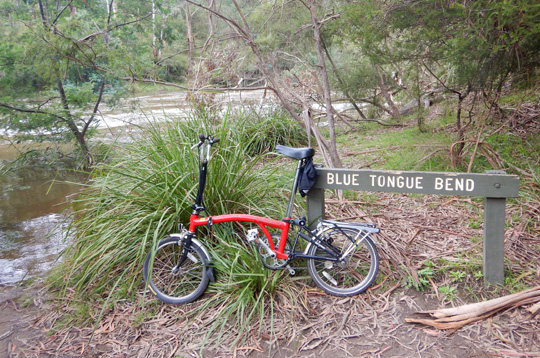 ▲ Blue Tongue Bend – and my Brompton bicycle – at the end of my Yarra walk.

From the Jumping Creek Reserve car park I continued along a similar riverside track and only encountered two more women, right at the end of the walk at Blue Tongue Bend. From Warrandyte it had been rather further than I expected and I was glad I brought the bike, because I really wouldn’t have wanted to retrace my steps all the way back. So I cycled the rough vehicle track which runs back to the Jumping Creek Reserve car park and then on to Jumping Creek Rd. Where the gate was shut so cars couldn’t get in, no wonder there were so few walkers. Jumping Creek Rd eventually joined the Ringwood-Warrandyte Rd, which took me back through Warrandyte and on to Taroona Reserve.

I’ve done lots of cycling along the Yarra and other river trips. Plus I often kayak on the lower Yarra, near my home in Hawthorn, but I have kayaked further upriver some years ago, with Ian Penrose, the Yarra Riverkeeper at the time. If I continue further upstream where will I go beyond my current stopping point at Blue Tongue Bend? No idea yet, stay tuned!