Revenge of the Sheep – or Sheep Schadenfreude


Australia still has borders closed between some of the states and there’s much discussion over when they will open or if it’s even legal to keep a border closed. When there’s talk of a ‘Trans-Tasman Bubble’ between Australia and New Zealand – separated by the Tasman Sea – it’s been suggested that Australians will be able to ski in Queenstown, New Zealand before they will be able to swim off beaches in Queensland, Australia. Unless they live in Queensland of course. 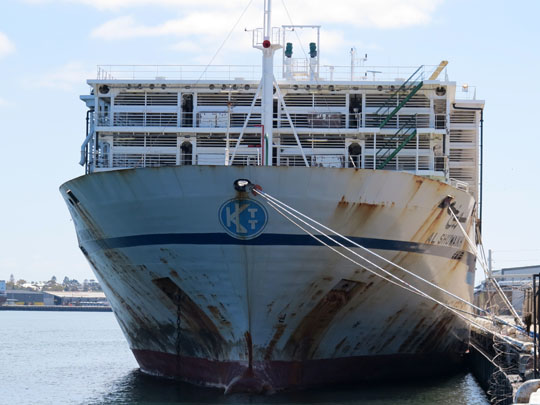 ▲ This is not the Al Kuwait, but it’s exactly the same sort of vessel. Like the Al Kuwait the Al Shuwaikh is a death ship, used to take Australian sheep to the Middle East in appalling conditions and I photographed it in Western Australia. We may do some things very well in Australia, but other things we do very badly – we elect governments that really like coal mining (some of them with politicians who really dislike solar and wind power as well), we treat some refugees appallingly and we can be bloody awful to our sheep. Sticking them on death ships – also known as the Live Sheep Trade – so they can turn up in the Middle East alive (well apart from all the sheep that die en route) where they can slaughtered in a manner that suits some crazy religious demand. The New Zealanders manage to sell their sheep frozen.

So it’s rather poetic that Covid-19 should arrive in Western Australia courtesy of a Live Sheep Trade ship. If Western Australian sheep could think in German they’d be enjoying schadenfreude: pleasure derived from another person’s misfortune.