I’m always delighted at how many things carry on and on in London. Here are three I’ve been to recently.

▲ I finally got to St Martin’s Theatre to see Agatha Christie’s Mousetrap. At 59 years and still packing them in it’s London’s longest running play. There was even a short run in China last year. 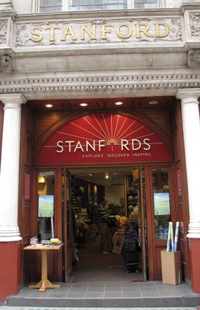 ◄ For books and maps Stanfords on Long Acre near Covent Garden has been running even longer, the first Stanfords maps appeared in the mid-1800s and the Long Acre shop has been in operation since 1900. Stanfords probably still has the world’s best map and guide collection and they’ve been selling Lonely Planet guides since 1975.

▲ Which makes Ronnie Scott’s Jazz Club on Frith St in Soho a relative latecomer. The club opened in 1959 and still attracts the crowds. I caught a performance by Buddy Greco, at 85 years of age and still going strong he’s an oldtimer himself.